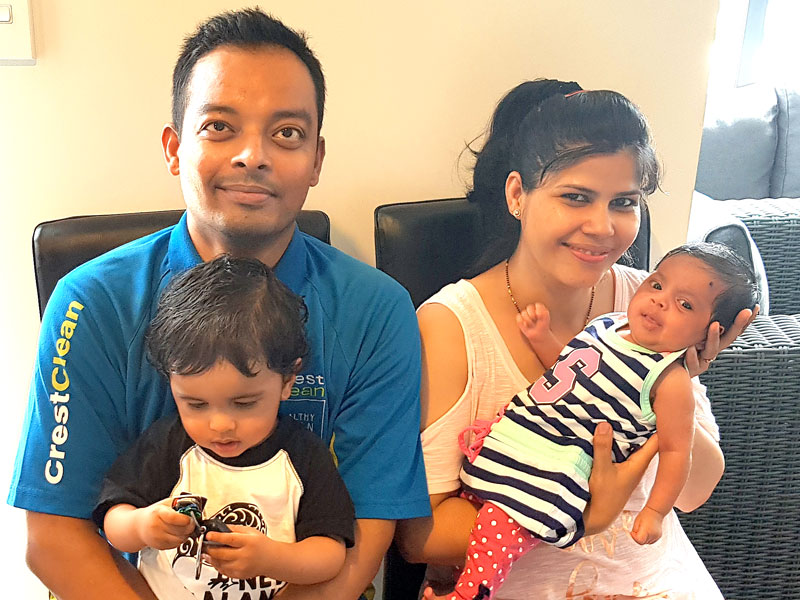 Being present for the birth of his first child was a precious moment for new dad Kapil Bhatt.

It was a joyous occasion he and his wife Preeti shared in the safe surrounds of a hospital birthing unit.

But little did they realise that just 15 months later what he witnessed and remembered that day would prove crucial when Preeti suddenly went into labour with baby number two.

In a late-night drama at the couple’s Johnsonville home, Kapil ended up delivering their baby daughter himself after an ambulance rushing to get there didn’t make it in time.

The 32-year-old CrestClean business owner, who had been working in the city, raced home to find his wife on the sofa about to give birth.

“It happened very quickly and I caught the baby. She was very eager to come out,” he says.

Minutes later after the ambulance crew arrived, Preeti and her new baby girl, who weighed in at 3.35kg, were checked over and whisked off to hospital.

Relieved to know everything was okay, Kapil turned his mind back to work – remembering he still had an office building to clean before the morning. He worked through the night, helped by his friend, fellow CrestClean franchisee Than Singh. He eventually finished work at 7am the next day.

His coolness in delivering the baby and his determination to complete his work left his CrestClean boss speechless.

“I think it’s absolutely gobsmacking amazing,” says Richard Brodie, CrestClean’s Wellington Regional Manager. “When he told me what had happened it took me a long time to click on to what he’d done.

“He was just so matter of fact that he was there to help his wife deliver their baby.”

The drama unfolded just before midnight on December 20 after Kapil finished at a customer’s site to find several missed calls on his phone from his wife.

When he called back his mother-in-law, Meena Joshi, answered. “She said where are you? Come home as fast as you can.”

Rushing home, Kapil waited for an ambulance he’d called, all the while getting advice and guidance from an operator on the situation unfolding before his eyes.

“I was talking to an ambulance service operator on the phone and he was updating me on when help would arrive.

“They were asking me a lot of stuff and whether I could see the baby’s head.”

Despite feeling apprehensive, Kapil was able to reassure his wife. “I told her not to worry, everything will be okay.

“Just a year before I’d seen my son born – but that was in the hospital. I had a basic idea of what to expect.”

He says he was running on adrenalin. “I was quite nervous throughout the whole process and feeling a bit angry the ambulance hadn’t yet arrived.

“There was no point in panicking, things will only go wrong if you panic. I had my mother-in-law there and that gave me some confidence,” he added.

“Never did I imagine that something like this would happen. For a moment I thought to myself ‘is this a dream or is it real’.

“We wrapped the baby as soon as she was born. I knew the basic stuff and she would get cold. The operator on the phone was telling us what to do.”

Kapil is “super excited” to have played a starring role in his daughter’s birth. “All’s well that ends well,” he added.