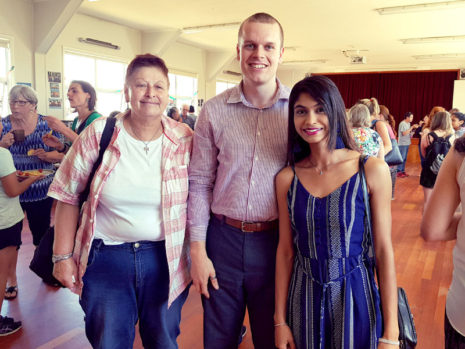 The hard work of those who ensure everything runs smoothly at a busy Wellington school has been officially recognised.

As part of the Bellevue School’s end of year tradition, all contractors and helpers are invited to attend a “thank you” morning tea.

And the CrestClean team who take care of the cleaning duties were delighted to be on the guest list. Crest’s Wellington Quality Assurance Co-ordinator Philip Wilson says it was a very worthwhile event.

“It was a great chance to talk to other contractors who service this school, along with getting further feedback from teachers.”

The event began with music and song, he says. “First of all the students sang four songs, two were in Te Reo Maori.”

The proceedings then moved on to marking the achievements of those who had worked hard behind the scenes over the past 12 months, said Philip.

“Karen Hardie, Bellevue School’s principal, then spoke and thanked all contractors for the effort that we’d put in this year.

“We were then shouted morning tea by the school,” he added.

“Shahin does an excellent job cleaning this school and has made a great start with CrestClean,” says Philip.

“She has a great relationship with Karen and the teachers who work there.

“It was great to be a part of this event as it adds strength to an existing strong relationship between Bellevue School and CrestClean.”