From minimum wage to business owner 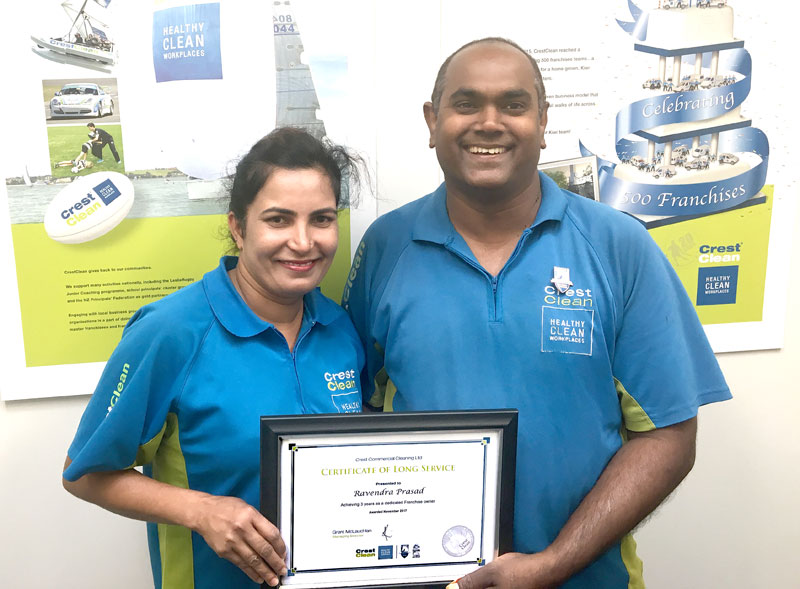 Roshni and Ravendra Prasad have been with CrestClean for three years and run a successful business.

It’s hard to believe how radically their circumstances have changed in just three short years.

Roshni Prasad had a job as a cleaner, and being on the minimum wage there was precious little in her pay packet each week. Her husband Ravendra worked hard as a mechanic and any thoughts they had of owning a home had been parked in the far too hard basket.

Fast forward to 2018 and it’s truly remarkable what the Auckland couple have achieved. They are now running a large cleaning business of their own, they have a lifestyle that’s the envy of others, and they’ve realised a dream by becoming homeowners.

But buying a CrestClean franchise and running a business had seemed daunting at first for the husband and wife, says Neil Kumar, CrestClean’s North Harbour Regional Manager.

“They were a bit hesitant when they joined Crest. The husband had left his job and obviously it was a big step for them, but eventually they proved they can run a quarter of a million dollar business, which they are doing now.”

With Neil’s encouragement, Roshni and Ravendra took on more customers as their confidence grew.

“At first we bought a small business and we’ve gradually increased the size,” says Ravendra.

“In the past three years I’ve managed to get everything I need. I have a house and we are very happy.”

However, their success has not come without putting in some hard yards. They’ve worked seven days a week to build the business. And their three grown up children have also pitched in to help out with the cleaning. The couple have also taken on a fulltime employee.

For Ravendra cleaning is a total contrast from his old job servicing Honda vehicles.

“I enjoy the work, all the cleaning mopping and dusting. It’s a good job and you are your own boss. It’s a really good feeling.

“The business is going really well and my customers are happy,” he added.

Neil says Roshni and Ravendra deserve the success they’ve achieved. “These guys really work hard and it was their motivation to buy their house, which they’ve managed to do. Now they are renovating their house and have put in a new kitchen.”

And he gets great customer feedback about the couple’s standard of work. A principal at a school they look after had to be reassured that Roshni and Ravendra would be staying on when the contract was renewed.

“The principal told me: ‘We have got lovely cleaners, everything is always looking nice – we don’t want to lose them’.”