Be part of Crest’s photo quest 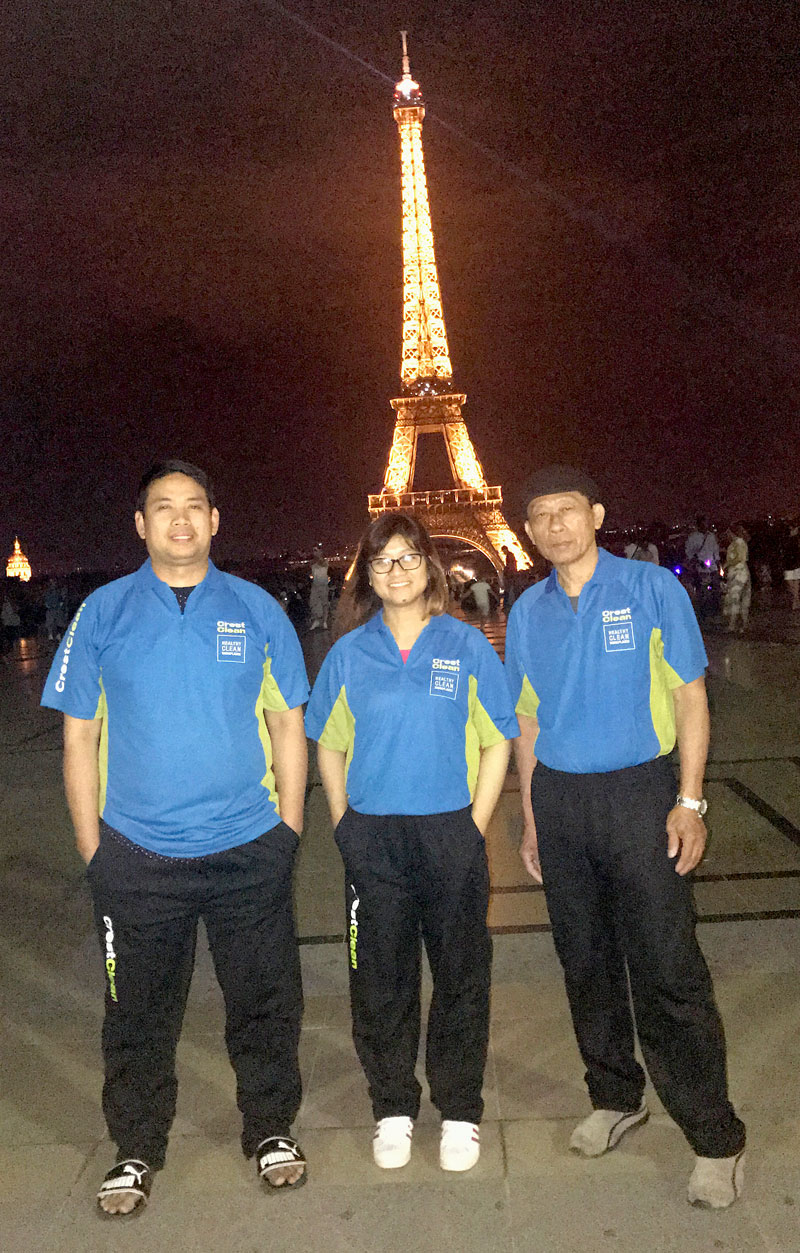 Jackie and Anthony Batoy with her father Jimmy pose at the Eiffel Tower in Paris.

Crest doesn’t have the contract to clean France’s iconic Eiffel Tower – well, not just yet!

While it might be a tall order right now, franchisees Anthony and Jackie Batoy left visitors to the famous Paris landmark in no doubt that the CrestClean team was in town.

Wearing their eye-catching CrestClean tops, the Invercargill couple became a talking point with tourists and locals as they posed for selfies at the tourist attraction during an epic holiday to see family on the other side of the world.

Their globetrotting trip took in many popular tourist spots across Europe – with each new place visited being a chance for the couple to grab another memorable snap of themselves in uniform.

And without fail, each time they posed for a picture heads would turn, their colourful company uniform sparking much interest and a deluge of questions would follow from curious passers-by. Jackie says they just about lost count of the number of people who came over to to ask them about CrestClean.

At the Eiffel Tower she and Antony and her father Jimmy wore Crest tops to snap the moment for the holiday photo album. “People were looking at us wondering what three people wearing uniforms were doing.

“They kept asking ‘what is that uniform’ and we told them it was part of our job in New Zealand and we are proud of what we do.”

They decided to pack their uniforms for the trip as a novel way for others to see how proud they are of their business and to keep their Regional Manager Glenn Cockroft in the picture while they were away.

During their travels the couple were also approached by many fellow Filipinos, everyone wanting to know more about CrestClean.

“I told them this is our own business and they were amazed. They could see that we were successful,” says Jackie.

Jackie says there were many highlights during their four week holiday, which took in Paris, Barcelona, Amsterdam, Antwerp, Cologne and Frankfurt. 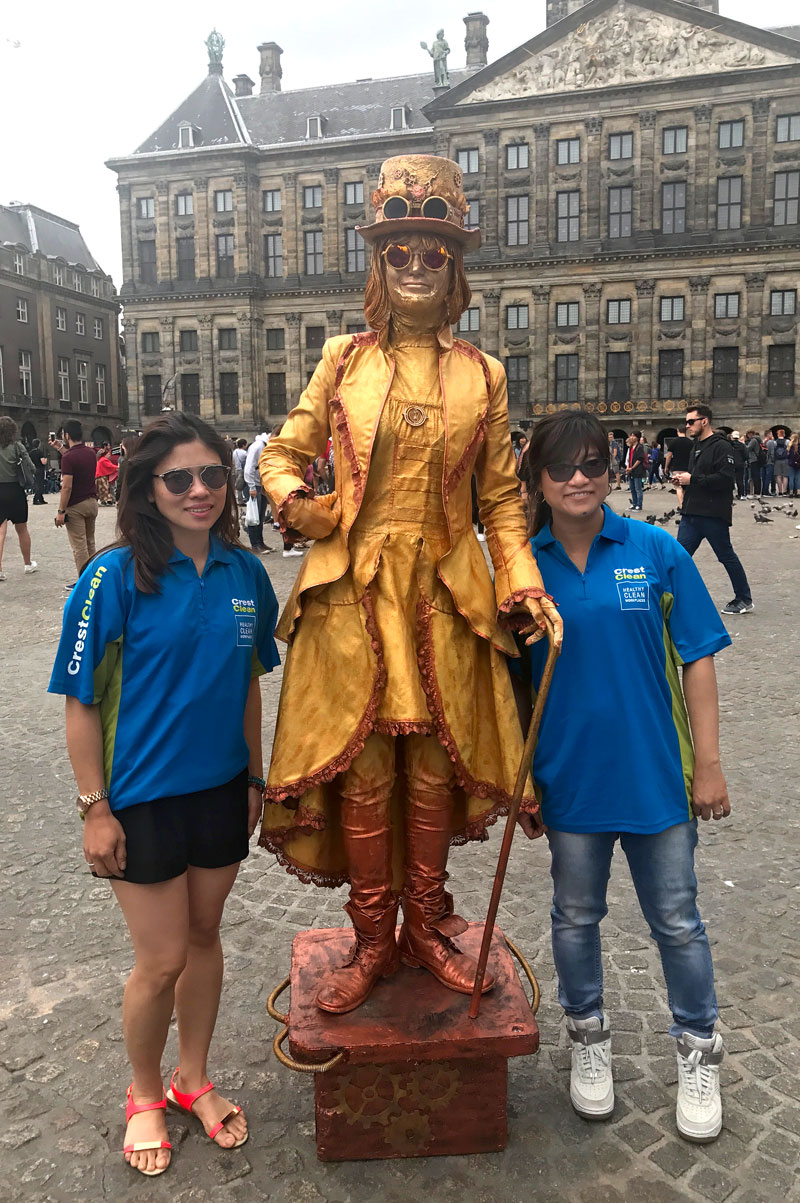 Jackie with her sister Sheryl during a visit to Frankfurt

But Paris was a firm favourite, she says. “It’s everybody’s dream to go to Paris. I can’t believe I’ve been there and my dream came true. It’s so historical and the buildings are so old.”

We think it’s fantastic that many of our business owners like Anthony and Jackie are rewarding themselves and their families with a well-earned break. A number of you have visited family overseas while others have managed to turn a long held holiday dream into a reality.

We always love to hear how you are doing so we can share stories of your successes on our website and on social media. So if you’re planning some globetrotting, be sure to keep CrestClean in the picture.

And don’t forget to pack your CrestClean uniform and snap some fun photos of yourself while you explore countries and continents afar.

Email your holiday photos showing you and your family in CrestClean uniform. Send your shots to: news@crestclean.co.nz Photos should be full resolution (original size).

The Batoy family are proud of what they’ve achieved through their CrestClean business. It paved the way for making their new life in New Zealand to be so successful, they say.

In 2007 the couple were living in the Philippines and made the life changing decision that they should emigrate to New Zealand. They wanted a better way of life for themselves and also their daughter Jazlyn.

Anthony, who had completed his doctorate in veterinary science, arrived first to take up a position as a dairy farmer just outside of Invercargill. Almost a year later Jackie, a medical laboratory technician, joined him with their daughter. Jackie began working as a caregiver in a local retirement village

In 2012 they made the next big life changing decision – the one that saw them then purchase a CrestClean franchise in Invercargill.

Over time they expanded their Crest business and decided to seek extra help to cope with the growth that they had. Staff members they took on included Jackie’s father Jimmy, who had joined them in New Zealand.

Jimmy remained with the family for three years before joining Jackie’s sister Sheryl and her family in Paris.

In 2014, with their business going from strength to strength, Jackie and Anthony decided to buy their own home – a spacious six-bedroom property in Invercargill. It was a perfect family home for their daughters Jazlyn, Erin and baby son Batskie.

About the same time the idea of a family holiday began. They wanted to give their children the opportunity to see some of the world, and of course to catch up with other family members en route.

Saving and planning for the trip went on for the next two years, with Antony and Jackie taking on additional cleaning contracts to provide the funds to ensure the holiday would be an unforgettable experience.

Their journey began as they flew out of New Zealand for the bright lights of Paris. They set up a “base camp” there with Jackie’s sister Sheryl and her family, including Jackie’s father Jimmy.

It was an emotional reunion as it had been some time since the families had been together, and the first time that the children had met each other. Jackie also had other relatives living in France and the opportunity to reunite with them was grabbed while they were there as well.

For Jackie’s aunts living in Paris, it was the first time that they had met Jackie’s children, and her husband Anthony.

They visited many different countries and experienced a wide range of cultures before they returned to New Zealand after spending time in the Philippines.

Now back in Invercargill, Anthony and Jackie have their sights on buying a rental home and saving for their next big holiday. 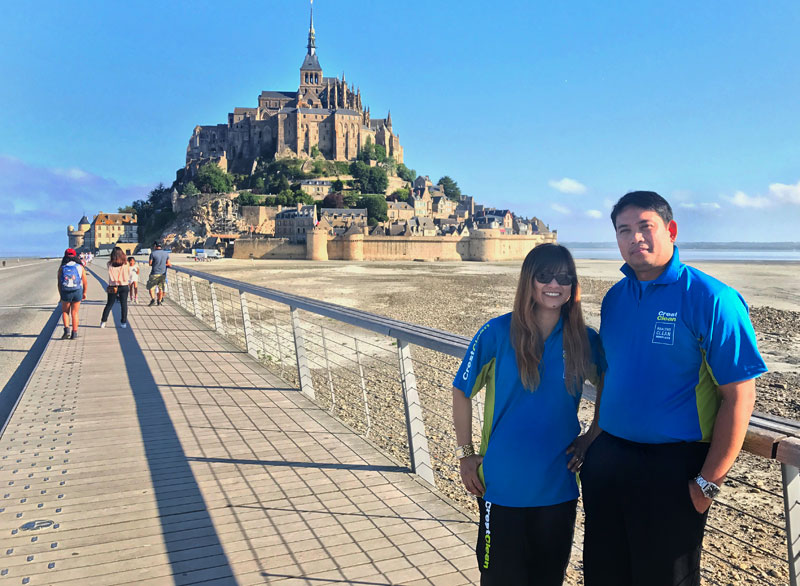 Jackie and Antony Batoy have a snap taken of themselves at Mont Saint-Michel, France. 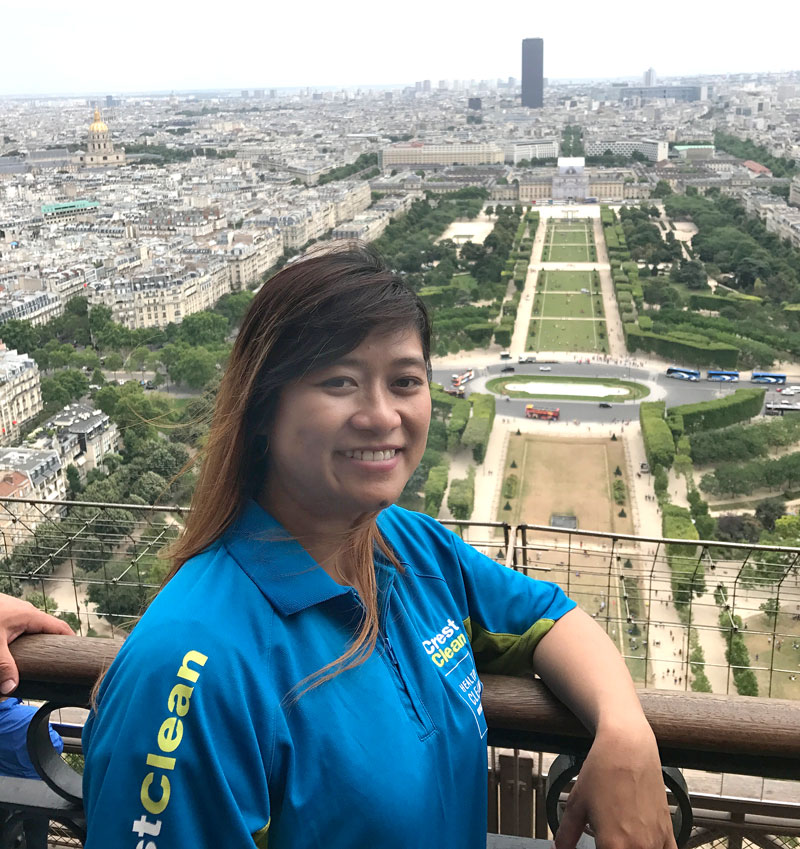 The view is stunning from the top of the Eiffel Tower.