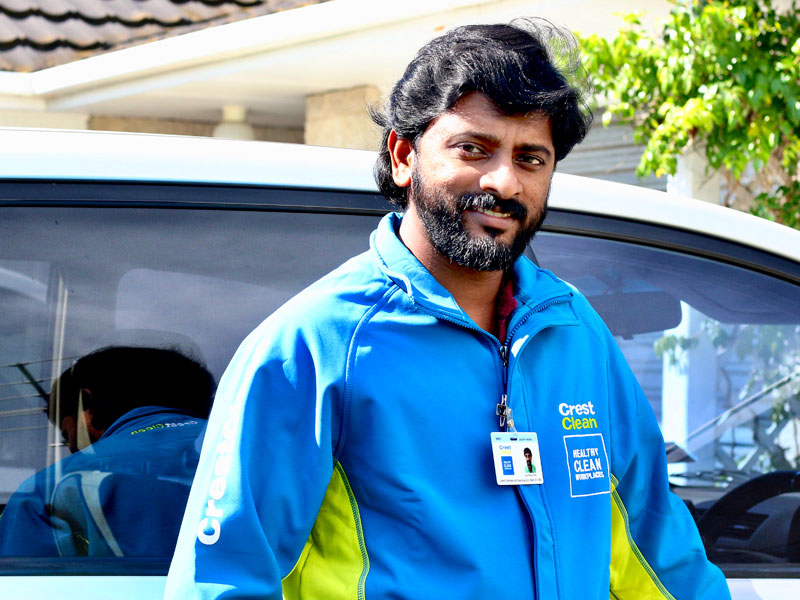 Jijoy Johny says he loves running his own cleaning business.

Jijoy Johny has plenty of time to spend with his two young daughters.

As a stay-at-home dad he has all day free until the early evening, when his thoughts turn to work and he leaves home to look after his CrestClean customers in the Wairarapa.

The 36-year-old dad says being a CrestClean business owner dovetails nicely with his family’s needs, allowing his wife Subha to continue with her job as registered nurse.

Jijoy hasn’t looked back since deciding to purchase a CrestClean franchise in 2016. He heard about Crest through chatting to a pal.

“A friend of mine in Palmerston North told me CrestClean is a good business and he gave me all the details,” he says.

Becoming his own boss meant resigning from the garden centre in Masterton where he worked in the distribution centre. Jijoy remembers it was a physically tough job.

“I was working 8 to 5 at the garden centre and it was quite hard work.”

These days he gets a lot of time to spend with his 2-year-old daughter and her baby sister, who is just 11 months old.

Jijoy and Subha are originally from India. They came directly to Palmerston North when Subha got a student visa to study nursing. Jijoy found work as a commercial cleaner in the city.

They love the Wairarapa region and have their sights set on a home of their own, thanks to the success of their CrestClean business.

“I plan to increase my business because I can easily manage more customers. The main reason is we plan to build a house,” he says.

Masterton is on the couple’s radar to put down permanent roots. Compared with other areas of New Zealand, the region offers good value, says Jijoy. Their budget of $470,000 should get them a four bedroom new home on an 800sq m section.

“Masterton is a nice quiet town and we are very happy here. The living expenses in the area are not high and everything is cheaper than other areas.

“There are some good shops here and you can get everything you need,” he added.

“He does an amazing job. Whenever I visit the Wairarapa to see his clients, the only thing they will talk to me about is how much they love having him as their cleaner.”

CrestClean’s reputation is opening new doors, says Philip. “Word is spreading among local business as to how good Jijoy is.

“The last three contracts we’ve picked up in Masterton have been from new customers hearing about Jijoy and wanting him to clean their sites,” Philip added.