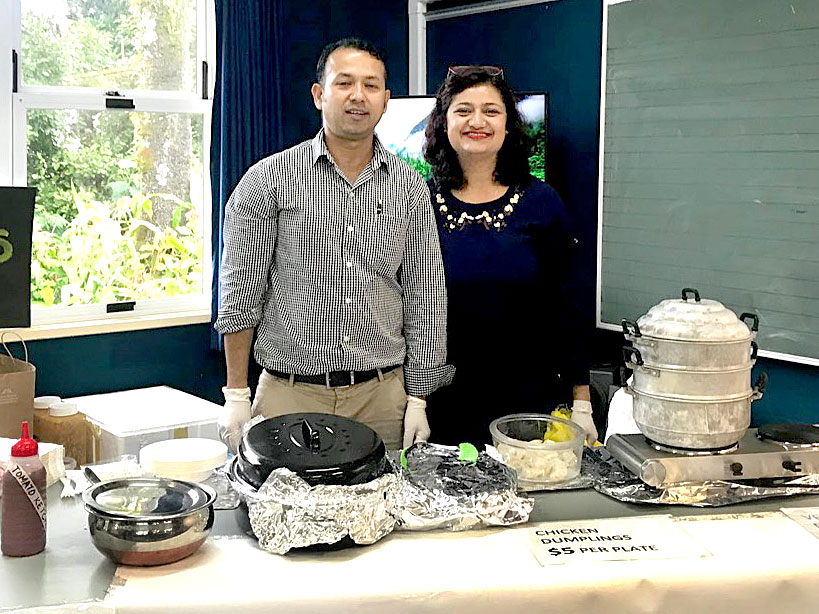 Hungry visitors cleaned out the entire stock of home-made dumplings cooked up by Crest’s Taranaki team for a school fundraiser.

There was a mini stampede for the tasty treats when Regional Manager Prasun Acharya and his wife Diksha Niraula set up their stall during a gala evening at Vogeltown School.

A long queue formed as the couple struggled to keep up with the demand, with many people waiting patiently for up to 12 minutes for a plate of dumplings as word quickly got around of how delicious the dumplings were.

People couldn’t get enough of the savoury treats, with Prasun and Diksha’s food stall contributing $500 towards the $7,000 raised for the school.

“We were cooking dumplings as fast as we could go,” says Prasun. “It was a rainy night and people wanted something hot and healthy.

“Everybody liked the food and some people even came back two or three times. They kept saying ‘the dumplings are so good’.”

Several members of CrestClean Taranaki assisted on the day, helping Prasun and Diksha prepare some of the dumplings beforehand, while other Crest personnel attended the gala to lend a hand on the stall.

“We were well supported by the team to make this successful. It would not have been possible without their help,” says Prasun.

He says the success of the event took everyone by surprise. “We literally sold everything we made, we totally sold out.

“It meant at the end of the evening we had no dumplings left for our own dinner!”

Prasun and Diksha are originally from Nepal where steamed dumplings are popular. So why is the savoury treat so popular in New Zealand?

“I think it was something a bit exotic and different for most people compared with the pizza or hotdogs they usually have at these events,” says Prasun.

Vogeltown School Principal Jeremy Ogle said he was delighted with the event – his only regret being not quick enough to try the dumplings before they were all snapped up!

“It was unbelievable that Prasun and his wife sold out of dumplings on the night. They raised $500 out of the $7000 total that means a lot to us.”

He says it was a sterling effort for the CrestClean team to give up their time and effort for the fundraiser. “They didn’t have to do this. It’s a company going above and beyond.”

The $7,000 from the event has gone towards the cost of a cycle path that has been laid down at the school.