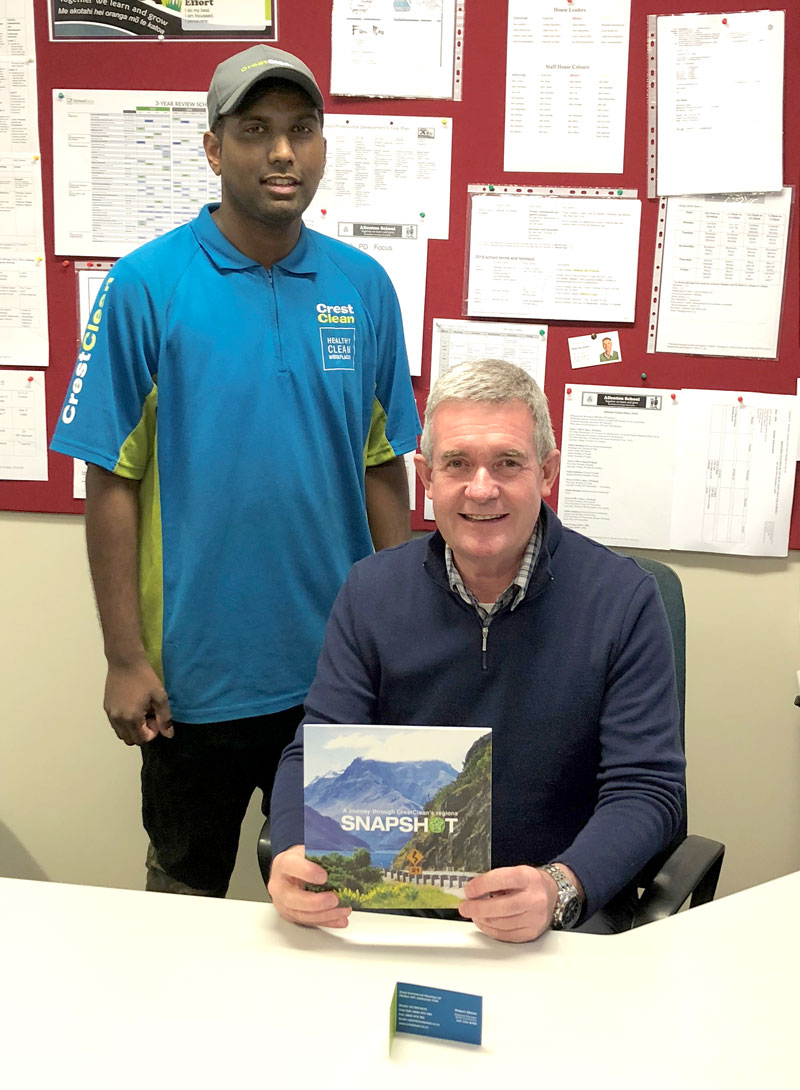 It’s not only CrestClean business owners who are reaping the benefits of relocating to regional New Zealand.

There has been a steady flow south of people from the Auckland area seeking a better life for themselves and their family.

And who can blame them. With less traffic to contend with, cheaper homes to rent or buy and a more relaxed lifestyle, it’s become a no brainer for many.

Among them is teacher Bruce Tilby, who has moved to South Canterbury to be the new Principal of Ashburton’s Allenton School.

And the move has continued his association with CrestClean. Like Orewa North Primary, where he was the principal, his new school also uses CrestClean’s services.

At Orewa it was through an association with Crest’s North Harbour Regional Manager Neil Kumar that first put the company on Bruce’s radar.

“I’d met Neil a number of times because he sponsored the local principals’ association and he did a few presentations.

“When our cleaner retired I got Crest in. Crest was the most competitive quote,” says Bruce.

The school was delighted with the standard of cleaning provided, he says. “The staff were really impressed with the way things were cleaned, they particularly thought the holiday clean was good.”

He added: “I’ve left one great school where CrestClean was and I have come to another great school, so I’m really pleased.”

“Our kids have grown up and were doing their own thing. I was very happy at Orewa North but we decided that this was our chance, we’d do something different,” he says.

“I like the South Island. We could reduce the mortgage, enjoy a different lifestyle and Ashburton is really quite central to so many things.”

Bruce, a former principal of Devonport and Wainui primary schools, was introduced to the CrestClean team shortly after taking up his new role.

And Ashitosh was quick to hand Bruce a copy of CrestClean’s 21st anniversary book, Snapshot, a pictorial journey through CrestClean’s regions.

“Ashitosh was proud to show Bruce that he and his wife Tia had made it into the Crestclean celebratory book and how very happy they are cleaning Allenton School,” says Rob.

The publication was well received. “I thought it was a really good book. It had lots of information. I’ve known CrestClean for a little while now so it was really positive,” says Bruce.