Crest has given us a great lifestyle 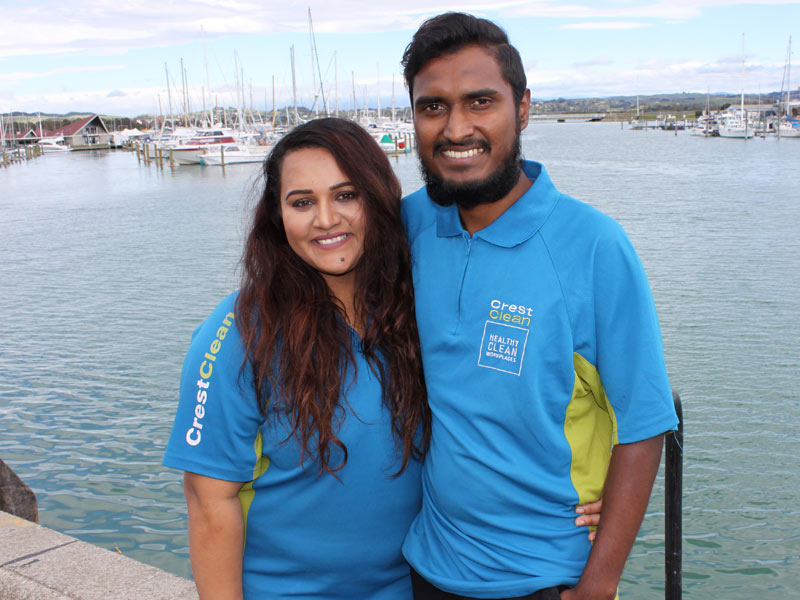 Nitendra Narayan and Karishma Chandra couldn’t be happier. Buying a CrestClean business has given the Hawke’s Bay couple the lifestyle they had been striving for.

It was while living in Wellington that Nitendra was introduced to CrestClean through a friend. And what happened next began the couple’s journey to working for themselves.

Nitendra began doing some part time cleaning for his mate’s Crest business in the capital city. And the more he learned about Crest, the more he could see himself doing the same.

“My friend was very successful with his business and he’d even managed to buy himself a house,” says Nitendra. “Buying a franchise seemed a good way to make some extra money.”

Nitendra, a qualified refrigeration engineer, realised that owning a CrestClean franchise would provide a business that he and Karishma could expand over time.

They set themselves a long term goal of being able to buy a property and also have enough spare money to enjoy some overseas travel.

It was in 2013 that they moved to Napier and initially bought a small CrestClean franchise. Over the past five years they’ve worked hard and now operate the largest CrestClean business in Hawke’s Bay.
They’ve been enjoying the rewards of their hard work. Last year they moved into a home of their own – a190 square-metre three bedroom house in a new subdivision.

“It’s a lovely home,” says Nitendra. “It’s because of the success of our CrestClean business that we’ve been able to do this.”

The couple have also managed to take a break from their business. In 2015 they got married in Fiji and later they took a month-long holiday in Europe to celebrate.

Nitendra says they’ve achieved a lot through being CrestClean business owners. “The whole point of having our own business was that we could have a house, be able to go away on holidays and have a better lifestyle. We’ve certainly achieved our goals.”

The couple employ two workers to help run their business. It’s given them more options. Karishma has her sights on a new career and is currently training to be a nurse.

“Running a business gives you a lot of freedom with flexible hours, especially at the weekends,” says Nitendra.

As for the work itself, the couple have learned how to work more efficiently since starting their business. But one key that’s a crucial factor in their success is having a good relationship with customers, says Nitendra.

“Establishing a personal relationship with your customer is important. It means visiting them regularly and listening to any concerns they might have,” he adds.

They’ve had the same staff working for them the whole time. Nitendra is great with the customers and is a good communicator.

“Nitendra and Karishma are very driven. They wanted to travel and they wanted to buy a house and they knew what they had to do to get there. They are a great team.”