Games medallist back in business after CrestClean replaces stolen gear 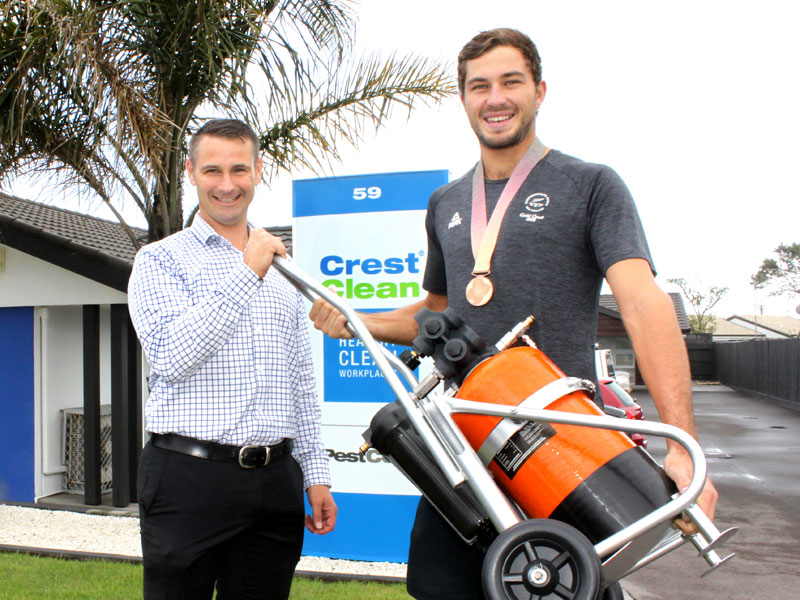 Tauranga’s Ben O’Dea has been given a helping hand to get his cleaning business back on the road after the Commonwealth Games athlete had his car stolen.

The 25-year-old said it “really sucked” when his Nissan Terrano was taken from his Mount Maunganui home while he and brother Sam represented New Zealand in men’s beach volleyball at the Gold Coast Commonwealth Games last month. Sam O’Dea represented New Zealand at the 2018 Commonwealth Games, where they won the bronze medal in the men’s pair competition

In the boot was the cleaning gear he intended to use for his solar panel maintenance business when he returned on April 17.

A Bay of Plenty Times story featuring O’Dea’s plight struck a chord with Jan Lichtwark, a multisport competitor who is regional manager of the Tauranga branch of commercial cleaning firm CrestClean.

“I felt angry and disgusted that Ben became a victim of crime as he was away giving his all while representing his country,” said Lichtwark.

“I met Ben to see what we could do to help. Our Commonwealth Games athletes train hard and they make a lot of sacrifices. For Ben to come home and face something like this must have been pretty gut-wrenching.”

Lichtwark has given O’Dea $1,000 of Pure Water Window Cleaning equipment to replace the specialist gear he lost when his vehicle got stolen.

O’Dea says it means he can get back to work and generate some income before having to undergo shoulder surgery in a few weeks.

“Being a beach volleyball player you don’t have a huge amount of money sitting in your bank. The timing of this couldn’t have been better.

“When you’re starting your own business on a pretty small budget every dollar counts,” added O’Dea, who won a bronze at the Commonwealth Games.

He said he’s been bowled over by the community support he’s received since returning home. Farmer Autovillage provided a replacement for the stolen 4WD and New World Mount Maunganui owner Allan Rudkin wrote a cheque for $1000 after hearing of his ordeal.

O’Dea learned that his car had been stolen just before the Games’ opening ceremony. “At first it really sucked. But I thought to myself ‘I’m not going to let this get in the way of something I’ve worked hard for’ and I put it out of my mind.”

But he admits that dealing with the consequences of the theft had not been easy. “Reality kicked in when I got back to New Zealand and I thought ‘I don’t have a car or the means to work’.

“I’m so grateful that so many people have been so generous to help me get back on my feet. It’s been pretty humbling to be honest.”