Homeownership thanks to success of his CrestClean business 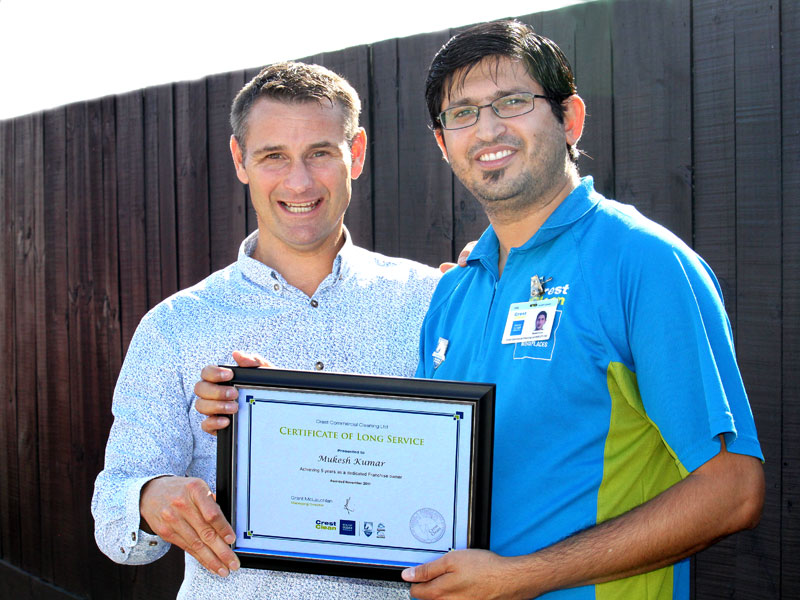 During the time Mukesh Kumar worked at a wood manufacturing company the idea of homeownership had been firmly pushed to the far corners of his mind.

With Bay of Plenty property market running hot, he saw zero chance of one day being able to afford a place for himself and his wife Sheron Shikha. “In the factory I was on a minimum income and it was hard work,” he recalls.

Ironically, it was a health issue that forced a change of circumstances, eventually leading to the couple being able to purchase a CrestClean franchise.

A reoccurring wrist problem at work meant Mukesh had to consider whether he could carry on at the factory where he worked. He was advised to look for a less physically demanding job or face possible long term problems.

After doing some research about working for themselves, Mukesh and Sheron bought a CrestClean business in Tauranga in 2012. Their hard work and determination to make their cleaning business a success paid off. It enabled them to save enough for a deposit on a three-bedroom house in the popular coastal city.

“At first it was a bit hard for them to buy their business and a suitable vehicle. But they’ve worked really hard and they’ve paid off their business loans and have been able to buy a house.”

Jan says it gives him a real buzz when his franchisees become homeowners. “Being able to buy a property in Tauranga is no mean achievement.

“Mukesh is very passionate about his business. He’s good at communicating with his customers and has introduced a lot of people to CrestClean who have also bought a franchise.

“He’s seen the big picture that it’s better having your own business than getting a job and working for someone else.”

Mukesh says getting the approval for a mortgage was relatively easy. His bank was more than happy to approve a loan because of Crest’s business reputation. “They knew we had a secure and regular fixed income from our business.”

Originally from Northern India, Mukesh came to New Zealand to study computing. But he says the cleaning industry is where his future lies. After receiving a five-year Certificate of Long Service from CrestClean, he’s looking forward to his 10-year milestone with the company.

And last month saw the couple attend a special ceremony. “We got our New Zealand Citizenship,” he says. “I’m a Kiwi now and I feel proud. It’s a really good feeling.”