Sophie Chase at work in one of the operating theatres at Royston Hospital, Hastings.

CrestClean’s Sophie Chase is a real details girl who thrives on new challenges.

It’s those qualities that have seen her excel in her role at Royston Hospital where she has earned a reputation for providing a high quality cleaning service.

CrestClean’s Hawke’s Bay Regional Manager Abby Latu says Sophie is well suited to the specialist cleaning role and she receives nothing but positive feedback about her work.

“Hospital cleaning is specialised work and Sophie is passionate about what she does and treats the hospital as her ‘baby’. She has a real eye for detail and the standard of her cleaning is outstanding.”

CrestClean personnel involved in private hospital cleaning must adhere to stringent hygiene procedures, as well as having the ability to maintain strong customer communications.

They must use site-specific equipment, wear special sterile hats, pants, tops and booties, and have regular audits of their work.

Sophie, who has been working at Royston Hospital for the past four years, says keeping the operating theatres clean calls for a high level of detail. CrestClean has two cleaning teams working at the private hospital in Hastings.

“There’s no room for errors at all – but that’s how I like it,” says Sophie. “I like challenges and I love the working environment.

“Physically it can be hard work but it’s rewarding. I enjoy cleaning and knowing that I’ve done the best I can when I’ve finished a clean.”

Maintaining high standards is something Sophie prides herself on achieving. “I self-audit my work every time, and after I’ve finished I do a final check to make sure that nothing has been missed. It’s a small but important thing that doesn’t take long at all.

“I walk out knowing that I can’t do any better than I have done.”

It is Sophie’s attention to detail that has been recognised by Abby. “Sophie has been helping me with some auditing work and she’s a fantastic addition to my management team.”

Sophie, who joined CrestClean four years ago, loves having her own cleaning business but she has one big regret – she wishes she’d known about the company earlier!

Before she joined the Hawke’s Bay team, Sophie spent 29 years employed at a local freezing works. She began there as a 17-year-old. “When I left I’d just about done every job there,” she says.

But it was cleaning at the Hastings Pacific Freezing works that she eventually gravitated to, a role she stayed in for 20 years.

Eventually Sophie felt it was time to move on. “I decided to get out while I was young enough to get another job somewhere else,” she says.

She began thinking about working for herself when a friend told her about CrestClean and the opportunities available to buy a cleaning franchise. “CrestClean had the best deal so that’s what I went for,” she says.

“The training I got was really good.” She like the fact that CrestClean has regular upskilling courses for its personnel. “I learn new things every year and I’m still learning,” she says.

“One thing with me is that if I get told something I remember it. I have a good memory for details.”

Sophie has expanded her business over the past four years and employs a worker to give her a hand.

A specialist in Hard Floor Care, she has landed some extra work by cold-calling prospective customers. “I just ask them if I can have a look at their floors. If it looks bad I tell them it could do with a strip and a polish. I’ve picked up a few strip and polish jobs like that.”

Having a positive attitude in business pays off, she says. “If you’re ready to work hard and work well, you’ll do all right.

“I love having my own business, it’s an awesome feeling.” 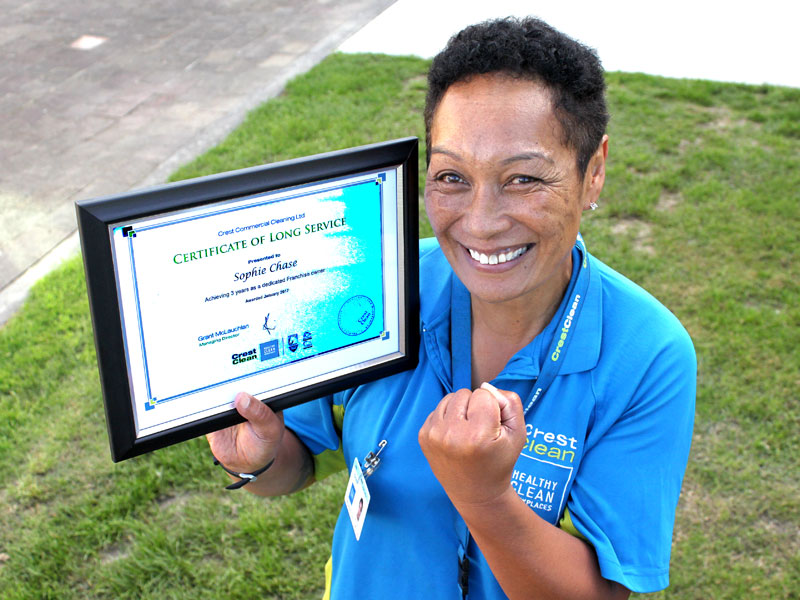 Sophie Chase is proud of her Certificate of Long Service. 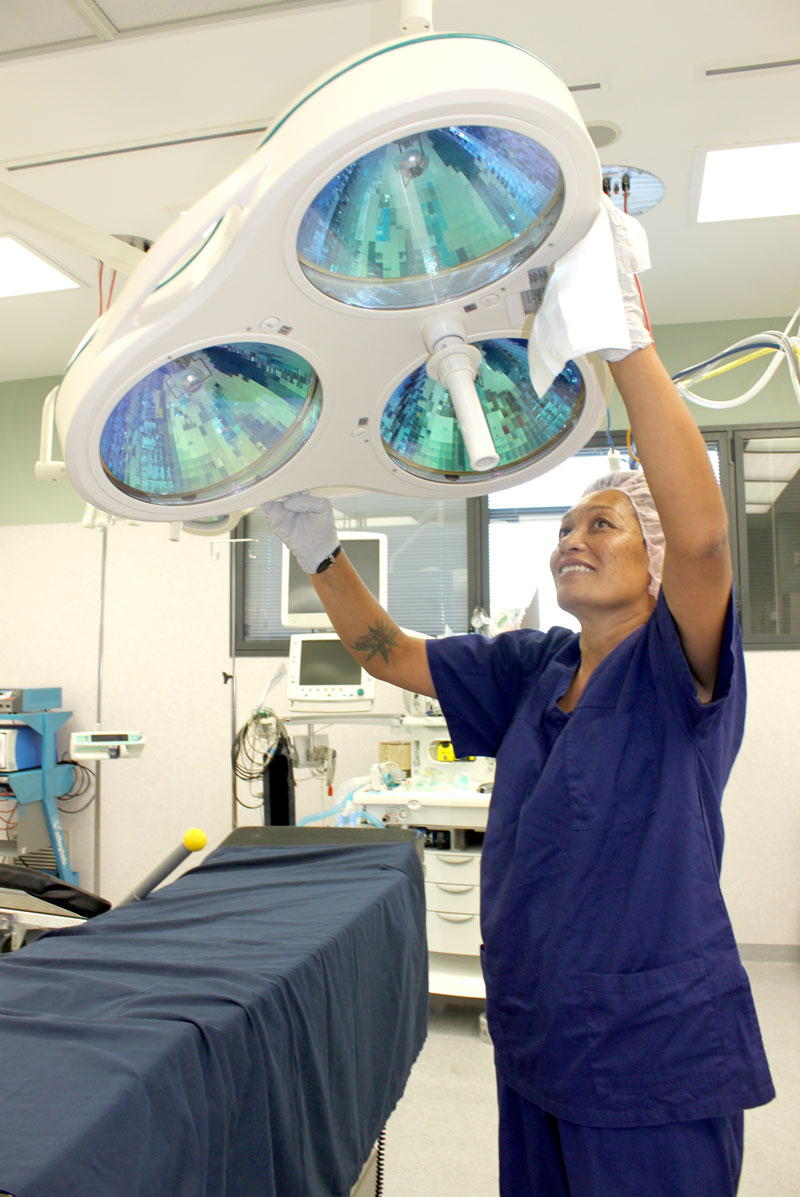 Everything in the operating theatres must be kept dust free.