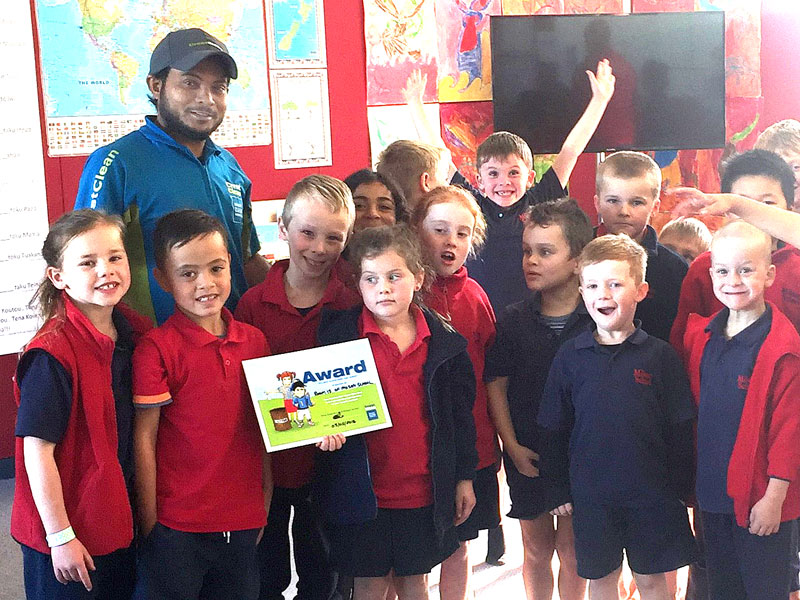 Aznayne Ali enjoys working at Palmerston North’s Milson School where the children go out of their way to make his job a whole lot easier.

But it hasn’t always been like that. When Aznayne recalls his first term at the primary school it’s hard to believe he’s talking about the same school.

Before he could start vacuuming classrooms he had to spend time picking up discarded items and an assortment of rubbish that had been tossed on the floor. While that was a hindrance, eating into the time allocated for cleaning the school, other areas were more concerning.

Toilets were often found in a messy state. Flooded sinks and blocked toilets were a headache, he recalls. “Banana skins and apple cores were sometimes stuffed down the toilets and they’d throw wet toilet tissues around that would stick on the walls.”

Realising something had to change, Aznayne and his wife Anjeline Sahayam decided to ask school staff if they would consider introducing CrestClean’s Cleanest Classroom Award.

“I talked with the school’s administration and they put something in the school newsletter about the competition and how it works,” he said.

The competition is an incentive to reward kids for being tidy. It’s run at many of the 474 schools that are cleaned by CrestClean business owners. The classroom that is kept the cleanest in the school is rewarded with a certificate and pizza at the end of term.

Getting the kids on board was key, says Aznayne. Word quickly spread that being the tidiest could bring a pizza prize for the winning classroom.

“Now the whole school is taking part in the competition,” he added. “The kids have taken a real interest in keeping the classrooms and the toilets clean.

“The teachers are also encouraging the kids to keep a healthy environment. They are really happy when we give out the pizza.”

There’s just one problem – everyone is working so hard to keep the school tidy that it’s making Aznayne’s task hard to pick a winner!

To reward everyone, he’s introduced extra prizes of ice blocks and lollies for the second and third place.

“He’s a franchise who is willing to help at any time if needed. He takes a real pride in his work. His customers love him for going the extra mile.”