Pride shines for franchisee: I’ve got certificates for the first time in my life 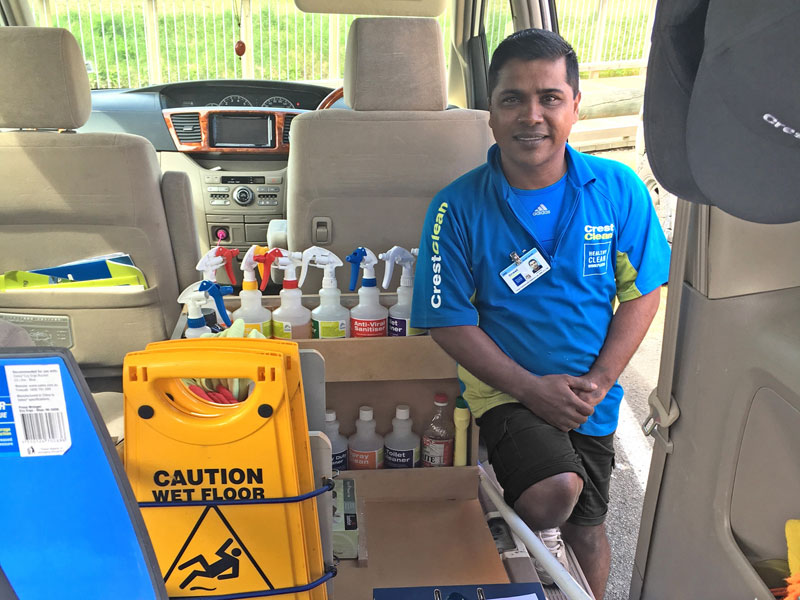 Ahimad Nur, who runs a $100,000 CrestClean business, overcame a major setback when he arrived in Napier to create a new life for his family and ended up sleeping rough in the city.

Business owner Ahimad Nur says he’s never been happier – and it’s not hard to see why.

His CrestClean franchise is thriving, his wife’s home sewing business is flourishing and his sons have excelled academically – with his eldest boy looking to study medicine.

It’s hard to believe that just seven years ago Ahimad had been living rough in Napier after his dream of making a new life for himself and family in New Zealand had hit a major setback.

Ahimad, a construction worker and builder, had arrived in New Zealand from Fiji ahead of his family, full of hope of finding a job in Napier. He had a sister in Auckland and took a bus to Hawke’s Bay, believing there would be jobs there.

But his effort proved to be fruitless as no one would take him on. He quickly realised that not having any industry qualifications would be a hurdle hard to overcome.

“I came here looking for greener pastures in New Zealand. I’d heard a lot about the country and that it was a good place to live,” says Ahimad.

Without a job and nowhere to stay in Napier, he had no option but to find shelter where he could. “I slept under a viaduct, I slept under Bluff Hill, and I slept on the roadside. I didn’t know anyone here,” he says.

With little in the way of money for food, it was tough he says. A low point came when he had just two packets of breakfast crackers, some bottled water and only enough money for the bus fare to Auckland.

But he was determined to persevere with finding work in Napier. “God was with me. I came in mid-winter and it was freezing and I didn’t give up,” he says.

“I thought ‘yes I’m going to struggle and I will have hard days but I won’t give up’.”

A chance encounter with a good samaritan who had a landscaping business brought a remarkable change of fortune. “I was walking on the street and I saw this guy with his chipper and chainsaw cutting trees. I thought to myself, I’ve done this in Fiji. The guy came up to me and we had a chat.”

Kind-hearted Russell Price offered Ahimad a room to stay in his family home. And their friendship would eventually lead to a job offer as a landscaper.

The arrangement helped Ahimad get back on his feet and it meant the family could eventually be reunited when his wife Shammi and their two sons arrived from Fiji.

The couple’s eldest son, Izack, attended Tamatea High School, where he became head boy and dux. It was Izack who first joined CrestClean, buying a franchise after leaving school. When he gained a university place to study science he handed the reins to Ahimad.

For Ahimad, having a CrestClean business has been life-changing, he says. “It’s the best thing that has happened to me.”

He’s says he feels empowered by having gone through CrestClean’s extensive training, where franchises receive industry qualifications from the Master Cleaners Training Institute.

“I’ve got certificates for the first time in my life. All my working life in Fiji I had no written qualifications. In New Zealand I have the Masters Cleaners Training Institute certificate that I’m really proud about.

“CrestClean has done so much for me. Now I can tell people that I have qualifications.”

Youngest son Ryan, 18, is still at school but wants to join the family franchise. “He said ‘dad, when I finish school I will be working with you for CrestClean and you can expand the business and we will work together to buy a house’,” says Ahimad.

Abby Latu, CrestClean’s Hawke’s Bay Regional Manager, says Ahimad is highly regarded by his customers for the quality of his work. “They love him. We were thrilled that he stepped up to buy the business.

“Ahimad is successful and had seen the money coming in for his family and he’s really enjoying the work.”

“He’s a handyman as well and he’s full of energy. When we moved office he was here putting up our posters and helping us move in.”

Ahimad, who is just 151cm tall, is commonly known as “Mr Small”. It’s a nickname that he fondly approves of.

“Everyone knows me as Mr Small. I love that name. It’s given me a new character,” says the 46-year-old with a smile.