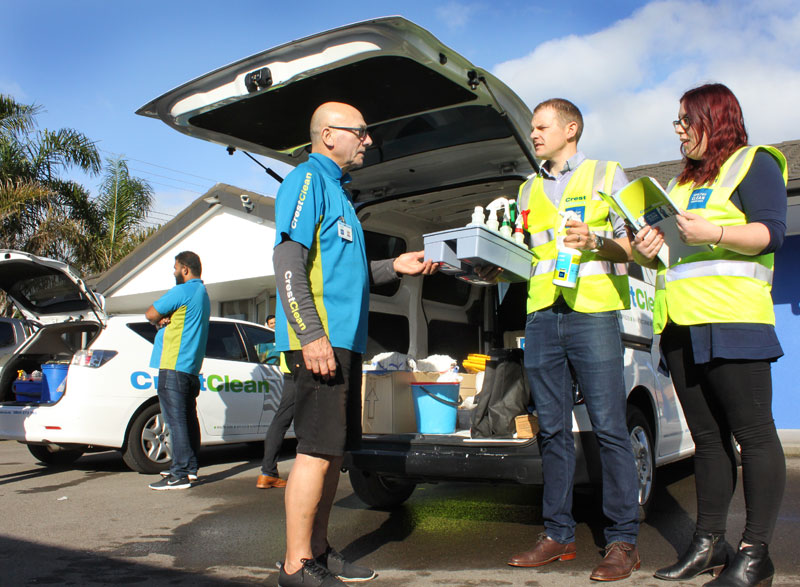 When Neville Hall was going through the motions of purchasing his CrestClean business in 2016 he knew the vehicle he chose for the job was a crucial decision that he had to get right.

But by opting for a Nissan NV200 van he had no idea it would make him a trendsetter. The spacious model would later become CrestClean’s preferred vehicle of choice for its franchisees throughout the country.

For Neville, who lives in Tauranga, having a vehicle with enough space for all his cleaning gear meant a van would win hands-down over a station wagon.

“I envisaged the job before I started with CrestClean. I looked at the NV200’s capacity and I thought ‘this will fit the bill ideally’.

“I didn’t want to entertain the idea of a station wagon as you could spend forever getting your gear in and out. The Nissan has easy access and the whole setup is far more suitable to this type of business.”

But like many other Crest franchisees who’ve gone for a NV200, Neville has found it’s cheap to run.

“It’s quite economical and I budget on about $50 a week for fuel. The key to it all, which I always maintain, is to keep it serviced and it will give you a minimum of problems.”

For Neville, who spent most of his working life at sea, takes personal pride in keeping his van ship-shape – inside and out.

So it was only natural that his NV200 sailed through CrestClean’s twice-yearly audit of franchisees’ vehicles.

Vehicles are audited regularly to ensure they meet compliance guidelines as part of the company’s Health, Safety and Environmental Management System. Equipment is also checked to ensure it is clean and correctly stored.

More than 40 CrestClean franchisees’ vehicles, including cleaning materials, were checked over during an audit in Tauranga.

“It helps us maintains our brand image by checking the vehicles are in good condition and if they need to be upgraded.

“I get to see all the vehicles throughout the country. We can maintain the same standards everywhere. It means we can ensure the quality of vehicle and quality of equipment in Invercargill is the same as it is in Auckland.”

The exercise is also paramount for maintaining CrestClean’s Environmental Choice NZ certification, he says. CrestClean is the only national cleaning company to have this valuable third party endorsement.

Before joining CrestClean two years ago, Neville spent 30 years as a catering officer working for Interislander ferries between Wellington and Picton.

He’s also been in the tourism industry, running a motel in Napier. Buying a CrestClean business has given him a new career that has brought him plenty of flexibly in the hours he works. At 68 he still enjoys the job – and it keeps him fit, he says.

“Most of my work has been in hospitality. Crest is just an extension of that. I like cleaning and the satisfaction of seeing something looking sharp and pleasing to the eye. Untidiness, dirt is not pleasant to the eye.”