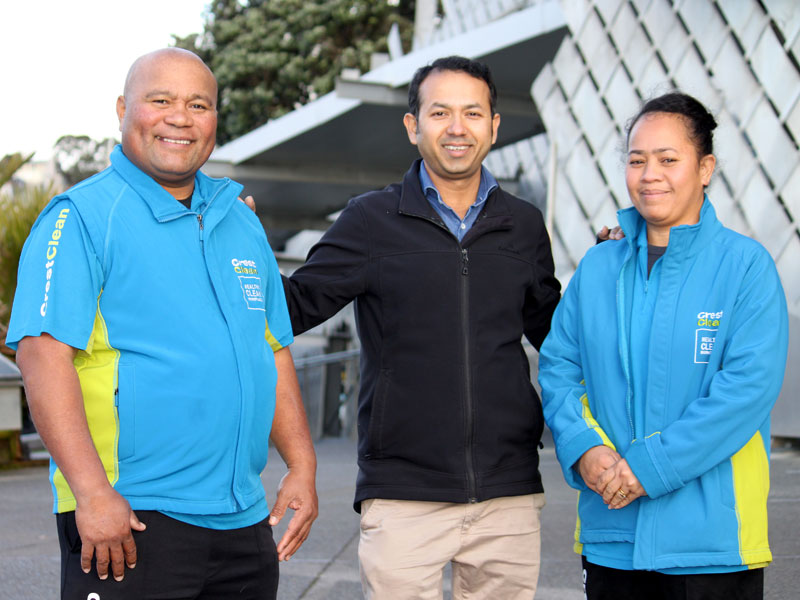 Working for themselves had seemed an impossible dream for husband and wife Afelee Niumea and Makalita Afelee.

They’d managed to buy a home of their own – but the New Plymouth couple, who have five children, were struggling financially to make much headway. However that all changed last year when they joined CrestClean and bought a cleaning business.

It meant a regular income and the potential to grow their business. Makalita says times were hard before they invested in a franchise.

“When we started with Crest everything changed for us. Before that there were times when we struggled to meet the mortgage payments. As soon as we joined Crest things got better for us. It was a big weight off our shoulders.”

The couple had moved to Taranaki in 2013 from Auckland when Afelee got a transfer with his job. A process worker, he was putting in long hours at the New Plymouth factory while Makalita found work as a caregiver.

After buying a cleaning business Afelee decided to keep his day job, which provides additional income for the family. He joins Makalita later in the day when they work together visiting their Crest customers.

Makalita says she likes being her own boss and it fits in with family life. “The hours are really flexible. I can spend the mornings with the kids and it suits our family’s needs.”

Buying a business meant the couple had to undergo a comprehensive training programme delivered by the Master Cleaners Training Institute. “I liked the training and we learned some good techniques and how to do the job well and work smarter,” says Afelee.

Job satisfaction from providing a great service for their customers keeps them focussed, says Makalita. So it was no surprise that the couple came top of a customer satisfaction survey carried out by CrestClean.

“They take a pride in their work and take feedback positively and see it as an opportunity to improve. They are very hardworking and have seen a real benefit in their lives through joining CrestClean.”

Being business owners has been life changing, says Makalita. “It’s a dream to have a business. It’s given us a new identity.”

She said initially taking the first steps into business ownership had been ‘‘scary’’. But Prasun had taken them through it step by step. “He was really helpful to us,” she added.

The couple, who are originally from Tuvalu, enjoy living in New Plymouth. “We like the people and they are friendly and there is a strong sense of community here,” says Makalita.

New Plymouth is a city included in CrestClean’s Move to the Regions Programme. There are many benefits of living in the regions: Earnings are the same as the big cities, costs are way less.

A range of financial incentives are available with up to $3,000 towards relocation costs for people joining Crest under its Move to the Regions Programme.