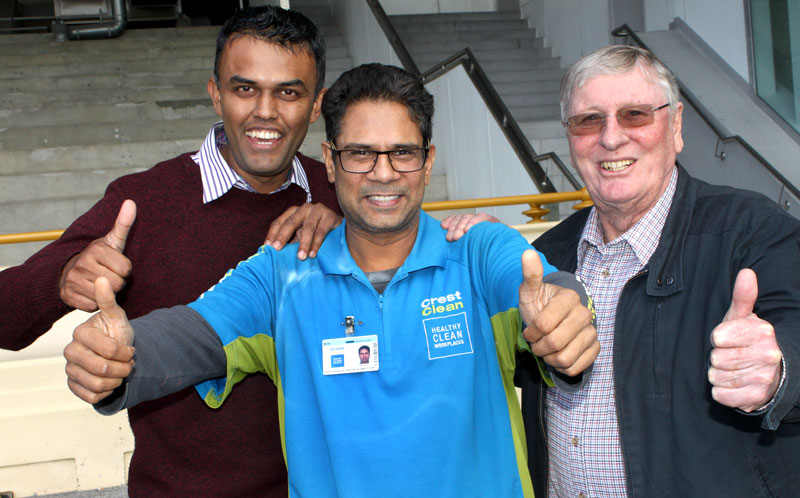 Sanjay Patel, who won $10,000 of gross turnover for his business. With him are Neil Kumar, North Harbour Regional Manager, and CrestClean chairman of directors Marty Perkinson who made the prize draw.

When Sanjay Patel got up early one Saturday to start work he had no idea good fortune was about to shine on him in the most spectacular fashion.

The North Harbour CrestClean business owner only knew he was in for a longer working day than a normal Saturday. After a busy morning cleaning, he planned to break off in the middle of the day to attend the company’s team meeting for its Auckland personnel.

The 45 year old is just thankful he decided to attend the event, held at the city’s Alexandra Park. As part of the fun, spot prizes were handed out during the lunch, which was attended by 380 Crest personnel.

The highlight came when CrestClean chairman of directors Marty Perkinson made the draw to win a prize of $10,000 gross turnover. It was Sanjay’s name that was announced as the winner. But Sanjay almost missed out as he was preoccupied – deep in conversation with mates on a table at the back of the venue.

“I didn’t hear my name called out,” he recalled. “A person sitting near to me said: ‘hey, Sanjay Patel it’s you, they are calling your name, go and see the MC’.”

Sanjay got up from where he’d been sitting, totally unware of the prize he’d just won.

“I was just stunned to win and it turned out to be my lucky day,” he says. “It felt amazing and it was a wonderful surprise. This is the first time I’ve ever won anything. It was a very good day for me!”

After the lunch Sanjay went straight back to work, not finishing until 5pm and keeping news of his prize win from his family until he got home. His wife Arpita couldn’t quite believe it when he told her. “She was really excited when I said we’d just won 10 grand of GTO,” he says.

Sanjay says he loves his work and it’s given him a new freedom. “Before I bought my Crest franchise I used to own a dairy. It was a seven-day a-week job. Now I get family time and I have one day off a week to spend with my wife and kids.”

“I’m pleased for him. He’s a really proud franchisee and he works very hard. I’m delighted the winner of the top prize is from my region,” he says.