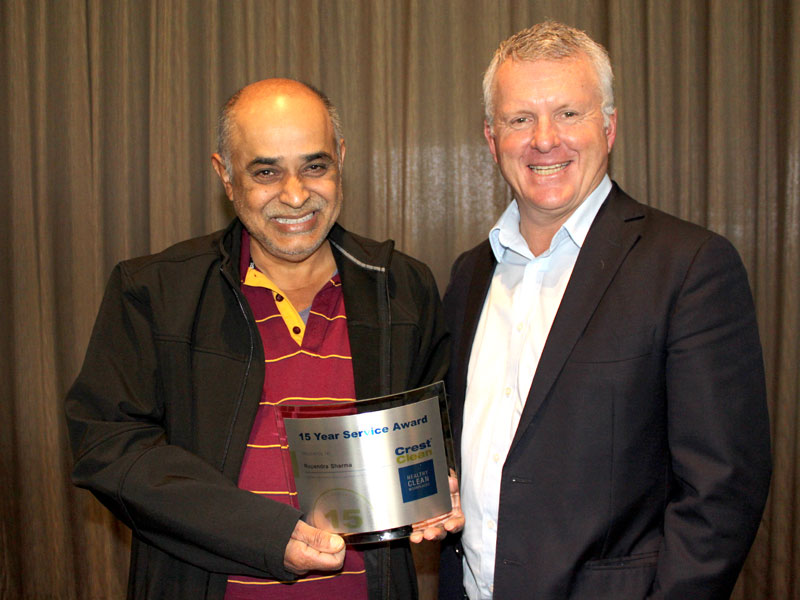 It’s often said it’s the little things in life that can make a big difference to your day.

For staff at Auckland’s Brand Developers, it’s the care and consideration shown by their cleaner that’s earned him their respect and where he’s become “one of the team”.

They can’t speak highly enough of Crest business owner Rupendra Sharma, who they say goes out of his way each day to ensure the cleaning doesn’t interrupt their work.

Pamela Carseldine, Office Manager at Brand Developers, says Rupendra is not only a great person he’s a cleaning superstar. “He’s absolutely wonderful. He’s there every day and he’s reliable, he’s dependable, he’s thoughtful and he’s sweet – I love him!”

When Rupendra is cleaning he’s always mindful of the working environment he’s in, ensuring he doesn’t inconvenience others, says Pam.

“If he’s in the middle of vacuuming and he notices someone walking, he turns off the vacuum cleaner and pulls it to one side to let them pass.

“If he’s vacuum cleaning upstairs, where we have an open office, and he notices someone is on the phone he will come back later. It’s just the little things of consideration that he does that make a difference,” she says.

Rupendra’s attention to detail and work ethic has also impressed Pam. “He’s someone you don’t have to think about or check up on as you know what he’s doing is right and he’s reliable and dependable,” she says. “It’s nice to have someone who is a contractor that you don’t have worry about.”

And Rupendra is popular with all the personnel at Brand Developers. “Everyone loves him and everyone knows him. If he’s not in for a day, or if he’s on leave, people will say ‘where’s Rupen?’ if they haven’t seen him.”

He’s even brought in treats on occasion, says Pam. “If he knows it’s your birthday he makes an effort and his wife will make you this really nice homemade butter chicken and he’ll bring it in for your lunch on your birthday. Just little things like that.”

The many accolades from Rupendra’s customers are testament to his 15 years as a successful CrestClean business owner. He firmly believes the job is more than cleaning.

“Cleaning is not that hard but you must really make an effort to get to know your customers,” he says. “You have to make sure you have good communications with them, even a smile and saying hello when you meet them goes a long way.”

Rupendra, who is 60, began his career with CrestClean in Christchurch. He ran a successful cleaning business there for seven years until the February 2011 earthquake turned his life upside down.

He and his wife Lalita were among the hundreds of Christchurch residents whose homes were wrecked in the deadly magnitude 6.3 earthquake.

“I lost two houses in the quake. Both were written off in the red zone,” he says. “It was a nightmare after the earthquake with a lot of aftershocks.”

At the time of the disaster Lalita, a former teacher, was working as a credit controller for GE Money. She was given the opportunity to relocate to Auckland or Melbourne. “We moved to Auckland and my wife’s company paid for all our relocation costs,” says Rupendra.

However, relocating to the country’s biggest city took the couple time to adjust to the faster pace of life, Rupendra recalls. “It was a big change for us, particularly getting used to the Auckland traffic.”

It was also a new city for Rupendra to restart his Crest business. He says he’s grateful for CrestClean’s Auckland Central Regional Manager Dries Mangnus in helping him gain new customers. “He gave me a lot of work when I arrived in Auckland. It helped me get established,” says Rupendra.

Dries says Rupendra is an excellent operator and he paid tribute to his 15 years in the industry. “He is great at building good relationships with his customers. These days it’s very rare for someone to stay in a job for such a long time. He works hard and maintains consistently high standards.”

“Rupen is very well known and very well respected. He’s really dedicated to what he does, he’s really reliable and consistent in his work,” she says.