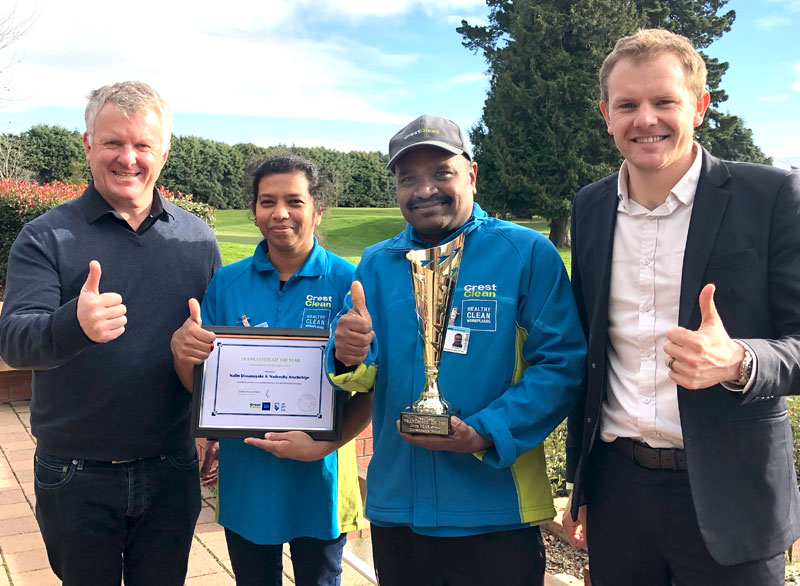 When he got a late night call that there was a serious water leak at a surgical centre, Nalin Dissanayake was there in a flash.

Going the extra mile for customers is just one an example of why Nalin and his wife Nadeesha are CrestClean’s Christchurch North Franchisees of the Year.

“All our teams work really hard and set an exceptionally high standard in what they do. Selecting an overall winner from the finalists was certainly no easy task.”

Yasa says Nalin and Nadeesha did a fantastic clean-up job following the flooding alert at Christchurch Eye Surgery. He called them when the centre’s owner contacted Crest after discovering a pipe above a suspended ceiling had burst. The incident meant the building was in danger of being flooded.

After the leak was fixed Nalin realised mopping up would be a big job. “The water had come through the ceiling and it was quite serious. There was a lot of water,” says Nalin, who worked until 2am on the clean-up.

The couple spent about four hours cleaning up, even returning a second time to make sure there was no further water dripping from the ceiling to surgery areas below.

“He went back late at night to make sure it was all sorted and there was no more water leaking so they could use the theatres the next day for operations,” says Yasa.

“The customer was very appreciative and said they had done a fantastic job cleaning up.”

Nalin admits it came a big surprise when the couple learned they had won franchisees of the year.

“We were very happy to receive this award as we’ve only had our business for 18 months. We both feel very proud of what we’ve achieved.”

The husband and wife team, who met in Sri Lanka when they worked at the same jewellery company, arrived in New Zealand in 1998. Both are qualified jewellery makers.

Nalin specialises in setting diamonds in rings and had worked for an export jewellery company in Christchurch.

But he’s recently decided to quit the jewellery business to concentrate all his efforts on the couple’s CrestClean business.

Since joining Crest, when they bought a small part-time franchise, Nalin and Nadeesha have tripled the size of their business and are now looking to expand further.

The couple are among other franchisees around the country who are in Crest’s $100k Club. The status recognises the company’s franchise owners who’ve achieved or exceeded $100,000 of annual gross turnover.