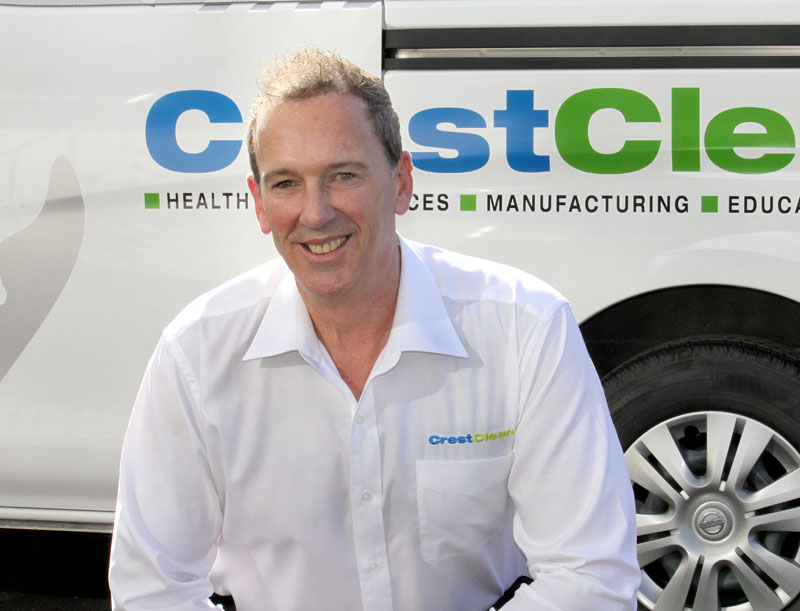 They might be as different as chalk and cheese but the roles of firefighter and cleaner have similarities, says CrestClean’s Vaughn Chiplin.

Health and safety and regular upskilling were core features of his 21-year career as a firefighter – and it’s the strong emphasis Crest puts on those values and standards that attracted the Aucklander to join the company.

Vaughn is now blazing a new trail in the cleaning industry as Crest’s latest Quality Assurance Co-ordinator. He says maintaining standards in any workplace is paramount.

“In every industry people start taking short cuts when they’ve been there for a while. When people are left to do their role things can have a tendency to decline over a period of time.”

But as well as checking and auditing the work of CrestClean business owners, Vaughn says the role is also about bringing out the best in people by good mentoring and encouragement.

“It’s not a case of pointing out to cleaners that they may have done some things wrong, it’s about how we can improve and lift up the service we provide to our customers.”

Vaughn covers CrestClean’s south and east Auckland areas. He enjoys interacting with franchisee owners. And he’s been impressed by how proud they are to maintain their high standard of work.

“People take it as a challenge when you point things out to them,” he says.

He says it’s not unusual for franchisees to send him photos showing where they’ve taken his advice and improved those areas that needed more attention to detail.

“It’s great to see them getting on board. They should never take the audit as a telling off or be embarrassed. It should be constructive as we are looking after a brand name. It’s about raising the standards.”

Crest’s Quality Assurance Co-ordinators are responsible for ensuring quality cleaning and supporting the local franchisees and Regional Managers. They are also involved in regular auditing of business owners’ vehicles.

Before joining Crest, Vaughn worked at Auckland Airport for 25 years. As part of the airport’s fire and rescue service, he was also trained in emergency care. Over the years he attended fire calls and medical incidents in the local area. Going to traffic accidents was also all part of the job.

The service is also responsible for providing marine rescue cover for the entire Manukau Harbour. As part of Vaughn’s role he got to operate a large hovercraft, which was on standby for any emergencies in the busy waterway.

It was while on duty covering the harbour that Vaughn noticed a large amount of rubbish and debris littering the shoreline. He began to tidy up the area around the hovercraft jetty, removing debris that could hinder the craft’s operation.

His one-man clean up blitz eventually grew into an annual clean-up campaign, involving scores of volunteers from the airport, nearby businesses and local schools.

“I began picking up plastic bottle caps and bottles, all sorts of stuff,” says Vaughn. “Then I bought a wheelie bin in from my apartment building into work and filled it within two or three days.”

The clean-up is now in its seventh year and is part of the “Love your Coast Manukau Harbour’’ campaign.

Vaughn is rightly proud of what he’s achieved. “It was just me picking up rubbish in the beginning and it’s turned into something big and something very positive,” he says.