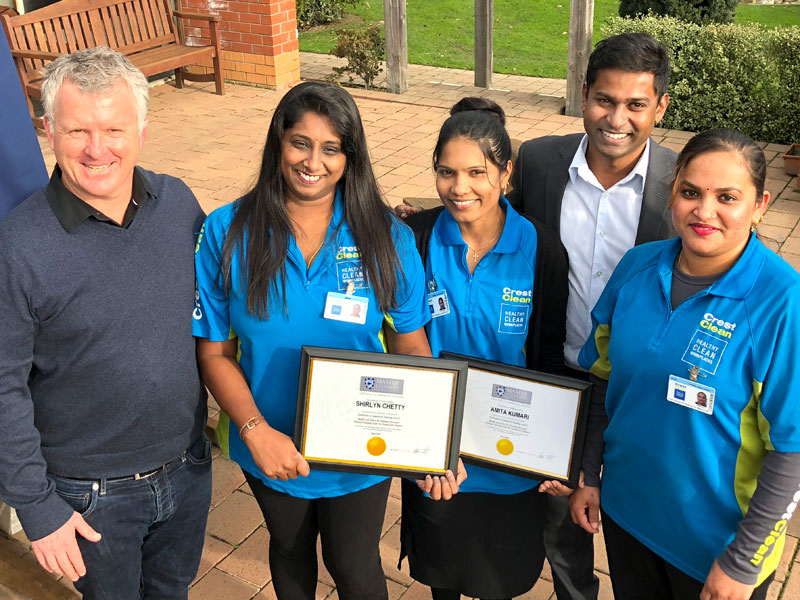 Three sisters-in-law surprised their husbands by joining forces to go into business together with their own CrestClean franchise.

For Shirlyn Chetty, Amita Kumari and Saleshni Devi, the decision has turned out far better than they expected. Not only are they enjoying the camaraderie, they’ve managed to achieve a much better work/life balance and now get to spend more time with their children.

Shirlyn, who at the time was working for Z Energy as an assistant manager, says they were ready for a change. “We planned to find something that all the sister-in-laws could get together and do.”

Saleshni was working as kitchen assistant in a rest home and Amita was a supervisor at a Countdown store.

Shirlyn admits they checked out several other cleaning companies first – but soon concluded Crest was best. “We kept seeing CrestClean vans everywhere, so we thought we’d go and ask about the company.”

After meeting Yasa Panagoda, Crest’s Christchurch North Regional Manager, the decision was made, says Shirlyn. “With Crest we were very happy with the way the presentation was given, it was very appealing.

“We felt that this is a promising company as it has got so many branches and we could see it was going ahead. We wanted something that’s stable and has chances within for people to grow.”

She says their husbands were a little taken aback at first. “They were actually surprised when we came up with the idea that we wanted to start a business and do something for ourselves.

“All three of us were working and have children, so we wanted to have more time with them. We wanted to do something different that would give us more family time. It’s worked out really well.”

The trio started in February after completing their initial training with CrestClean’s Regional Trainer Rajinesh Prasad. They’ve gone on to complete advanced courses with the Master Cleaners Training Institute.

Shirlyn says she was impressed by the training they received. “When we had our induction training with Raj he showed us all the procedures. But when we came to attend the first training module we saw exactly how things are put in place. It made our work really easy.”

They love working for themselves, she says. “When we started with Crest we thought it was going to be hard journey. With the support from Yasa and the trainer, it’s just all gone smoothly.”

The trio work well together and the time they get seeing each other is an added bonus, Shirlyn says. “We get a lot of time to chat together and catch up on things. We usually work from 4.30-9.30pm.”

Shirlyn says they were particularly impressed by a presentation given by CrestClean’s Managing Director Grant McLauchlan, who hosted a recent team meeting for the company’s Christchurch personnel.

“Grant is an inspiring person. He really inspired us. He’s a people person and everything he said was very clear and precise and he has a big vision for Crest – we loved it!”

The women are already planning their next move. “We are definitely going to grow the business in the next six months. We are enjoying it very much and we feel proud to tell everyone we now have a business,” says Shirlyn.

Yasa says the trio are the first all-women team for Christchurch North. “They are friendly, easy to deal with and customers love them. They have very good communication skills and have a great sense of humour and are always keen to learn things.”