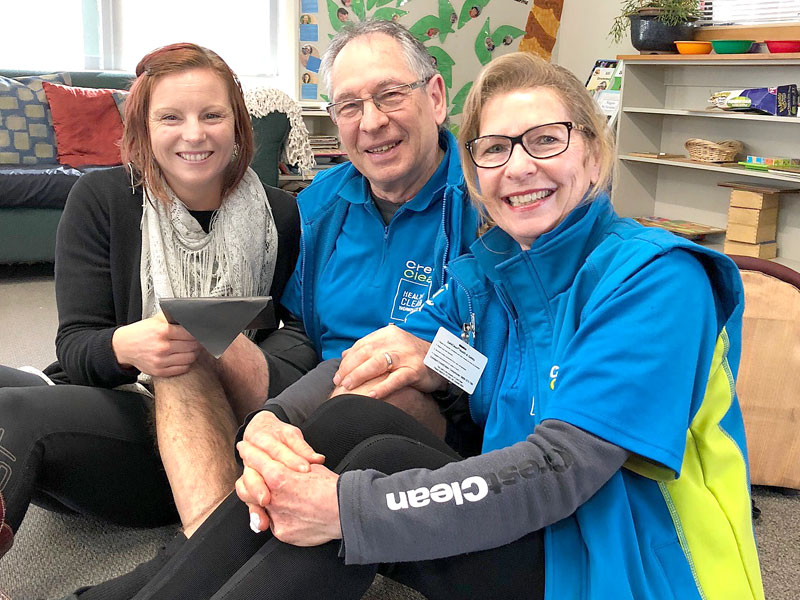 Caring CrestClean couple Linda and Colin Bartlett have helped to pave the way for a preschool teacher to represent New Zealand in Spain at an international athletics event.

Thanks to the generous support of Motueka locals, Joeline Jones is now on track to attend the World Masters Track and Field championships in Malaga next month.

Joeline is a staff member at Oasis Education Centre, one of Linda and Colin’s CrestClean customers. After hearing of Joeline’s bid to raise $6,000 to cover her costs of attending the event, the couple decided they wanted to help and presented her with a $150 cheque.

“We often bump into the teaching staff when they’ve finished their work or in the morning before they start for the day,” says Colin. “We’ve developed a friendly relationship with Joeline. In the course of conversation she let us know she was off on a trip to Europe to represent New Zealand in a sporting event.

“She was doing lots of training locally and she indicated that to help her be part of the team and cover her costs to attend the games, she was hoping to raise some funds from our local community.

“We were impressed in Joeline as a person and with what she was achieving in her sporting code. We decided we’d like to assist her in sponsoring her with some money that would help her be able to attend the event and not worry about finances.”

Linda and Colin dropped in on Joeline at her workplace to hand over a card and a donation. Joeline was lost for words by the surprise presentation.

“For the first time in my life I was speechless, and that’s pretty hard. It’s not very often that I don’t have something to say,” she says.

“It was awesome and so generous and kind of them. In every interaction that I’ve had with Linda and Colin they’ve just been really lovely. It means a lot that they’ve taken into consideration what I’m about to do and came to help, it was so kind.”

As well as people chipping in to help, a quiz night at the local pub was among the fundraising events staged to raise money for her trip. “The community here is wonderful, it just makes you so happy to be part of it,” says Joeline, who has raised more than half her $6,000 target as a result from fundraising.

“It’s a pretty amazing feat to come from such a small town and to be representing New Zealand internationally.”

Barbara de Vries, CrestClean’s Nelson Regional Manager, praised Linda and Colin’s generosity. “This was a lovely gesture from them and the financial donation will help Joeline get to Spain to represent her country.”

The World Masters takes place in Malaga from September 4-16. Joeline is part of a team of 52 New Zealand athletes. The mum of two will represent her country in the 200m and 400m sprints.

The World Masters Athletic Championships are for athletes 35 years and over and incorporate track and field events, cross country, and a half marathon.