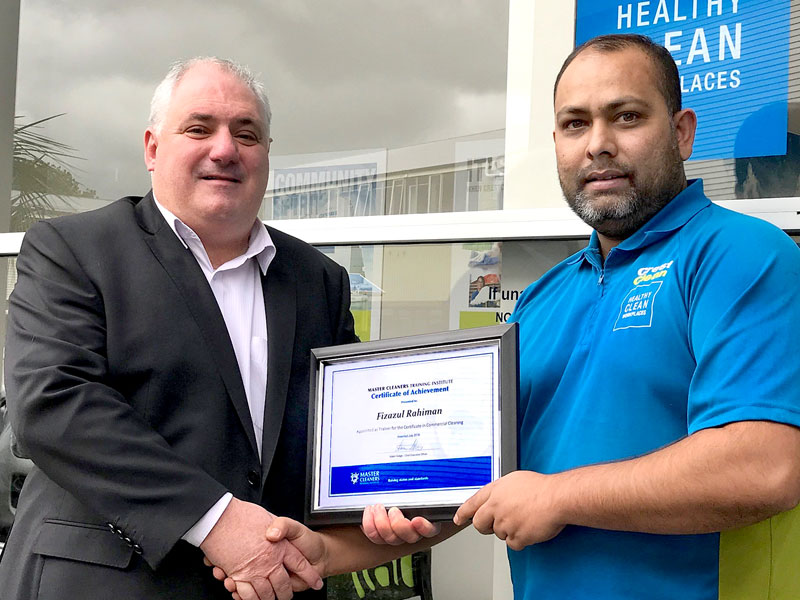 His friends were quick to poke fun at him when he told them he’d bought a cleaning franchise.

“When I joined CrestClean my friends laughed at me,” Fiza Rahiman says, recalling the cruel comments from mates who would later be forced to eat their words.

“They told me that being a cleaner was probably the lowest job you could get,” he says. “They thought cleaning wasn’t meant for a guy to do.”

But he proved them wrong. Now it’s Fiza who has had the “last laugh”, his business going from strength to strength – his experience being officially recognised by the Master Cleaners Training Institute. He’s recently been appointed as a CrestClean Regional Trainer for Auckland.

It was in 2008 that Fiza joined CrestClean. He’d been working in retail as a sales consultant for Hill & Stewart – but when JB Hi-Fi acquired the company he opted to take a redundancy package.

He used some of his payout to buy a small Crest franchise. Fiza threw himself into the business, thriving on the change of direction and lifestyle benefits. He had a regular income and was enjoying more time with his family. His business would eventually triple in size as he took on more contracts.

Fiza’s success forced his critics to change their tune. “Some of those who’d laughed at me later came to me asking, ‘how do I go about getting a Crest franchise’,” he says.

Fiza is proud of his achievements. “Today I can confidently say I’m a qualified cleaner and a business owner. It’s a great feeling being your own boss.”

Like other Crest business owners, Fiza enjoys the work/life balance and having flexible hours. He gained a qualification in carpentry, studying part time at Auckland’s MIT.

His business has also given him plenty of time to indulge in his hobby of renovating the Auckland properties he’s owned.

Adam Hodge, CEO of the Master Cleaners Training Institute, says Fiza is a great ambassador for Crest in his role as a Regional Trainer. “He has a wealth of experience and is passionate about what he does.”

Fiza excelled in his final assessment to qualify as a Regional Trainer, Adam says. “His preparation and attention to detail was superb.

“He’d actually delivered the presentation to his family at home to make sure he was word perfect on the day. That shows his level of commitment.”

Being a trainer is a rewarding role, Fiza, he says. “Training is important and I enjoy sharing my knowledge with newcomers. It’s important we look after the CrestClean brand by maintaining the high standards and ensuring everyone is on the same page.