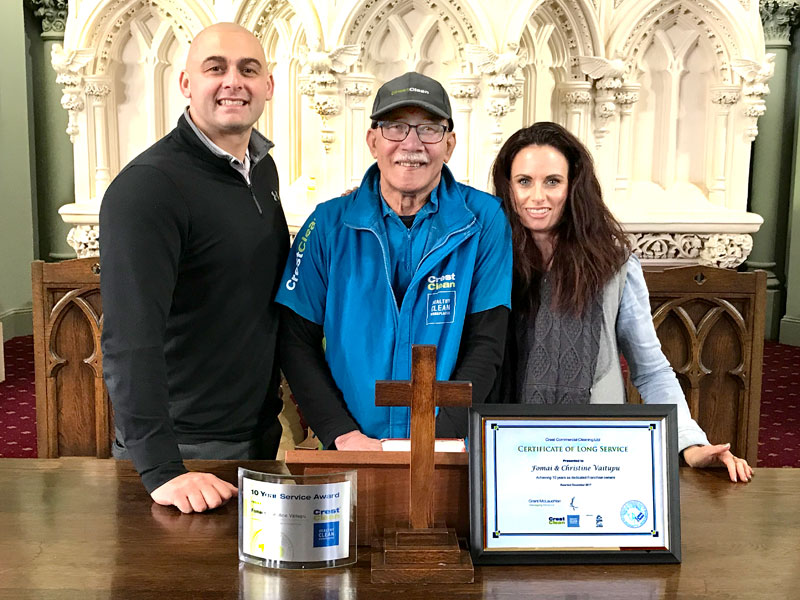 Fomai Vaitupu with Tony and Nicky Kramers in the First Church of Otago at Dunedin where he is an elder and Secretary of the Samoan Congregation.

He’s just a few days away from being eligible to draw the pension but Fomai Vaitupu won’t entertain any thoughts of hanging up his cleaning gear.

“I’ll be working in Crest for as long as I can stand up,” was the quick-fire answer when CrestClean bosses asked what his five-year goal was.

Fomai’s reply came as no real surprise to Tony Kramers, CrestClean’s Dunedin Regional Manager. “Fomai loves what he does and he’s not afraid of hard work.”

Tony says Fomai is “one of the nicest guys you could meet” who is popular with customers and has a wealth of industry experience.

“He’s polite, caring and nothing is ever a problem. It’s just been a pleasure to have him as part of our team. Customers love him because he’s such a bubbly, happy and friendly person.”

Fomai and his wife Christine have just clocked up 10 years’ service as CrestClean business owners.

Originally from Samoa, Fomai first came to Dunedin in 1976. He had a number of jobs, including working as customer agent at Sew Hoy and Sons Limited. He was at the Stafford St clothing manufacturing company for 15 years. But in 1996 Fomai and Christine moved to Samoa, spending 10 years away before eventually returning to Dunedin.

The couple bought their Crest franchise in 2007, with Fomai the mainstay of the business in the daytime and Christine, who works as a care assistant, helping out in the evenings.

Being his own boss has been a blessing in many way, says Fomai, the flexible hours meaning plenty of time for his family and his commitments as a lay preacher and elder at the First Church of Otago.

Like many Crest franchise owners, Fomai has enjoyed being able to afford to travel. Last year the couple had three weeks in America. They are also planning a trip to Aussie to celebrate their 10 years with Crest and next year a trip to Europe is on the cards.

“If I didn’t have the franchise we would not have been able to travel as much,” he says.

Fomai, 64, says working as a cleaner still keeps him in shape, “It’s a physical job and it keeps me fit. You need a bit of muscle to push a mop around!”

Although he’s seen many changes over the years, he says one thing hasn’t changed. “You have to remember the customer is always right.” Getting to know your customers is vital, he says. “I have very good relationships with my customers. I think it has been one of my strengths.”

Keeping up with innovation and upskilling was also important, Fomai says. “You learn new things every day. Even though I’ve been doing the job for 10 years, I’m still learning. You have to keep up with what’s happening in the industry.”

But although cleaning could be tough at times, keeping a sense of humour definitely helps, he says. He laughs as he recalls the day he had to be rescued from a lift at a customer’s office site in Dunedin.

“The lift got stuck and I was there for about two hours in the middle of the night until someone arrived to let me out. There was nothing I could do, I had to see the funny side of it.”