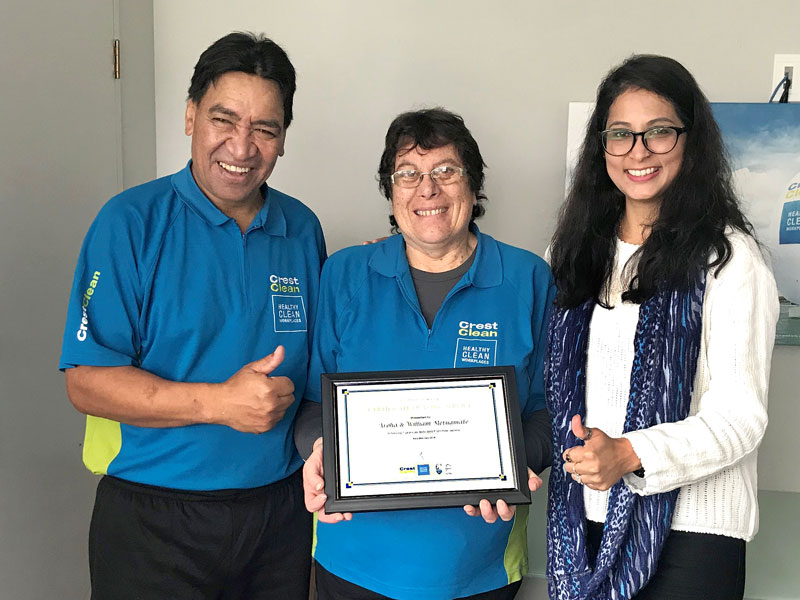 Her CrestClean business was trucking along nicely – but it’s really taken off since she got her lorry driver husband on board.

Aroha Metuamate has more than doubled the size of her franchise since William quit his day job. The couple have now joined other franchisees who are in Crest’s $100k Club. The status recognises the company’s franchise owners who’ve achieved or exceeded $100,000 of gross annual turnover.

Now the husband and wife team from Palmerston North are looking to expand their business even further and are thinking of taking on staff.

Aroha says it took a bit of arm twisting before she could convince William to give up his job as a truckie. The fact he’d become weary of long days at the wheel driving huge refrigeration units around the country meant he was in the mood to think about a change, she says.

“He used to do ungodly hours – 14 to 15-hour days. I just said to him one day ‘would you like to come on board with the business?’ He eventually said yes.”

She laughs as she recalls how she put pressure on her husband to give up his day job. “I more or less gave him an ultimatum to come on board!”

It was a decision he’d been contemplating for some time, she added. “He wanted to get out of trucking as he was missing the kids. The kids used to be asleep when he went to work and it was the same when he got home. He never had time with them.”

She says they are now much better off financially. “My husband can’t get over how well we’re doing. He says he wishes he’d joined me in the business when I first asked him.”

Aroha says life has never been better and she says Crest made it easy to expand the business.

“We are now looking at employing someone to help us. I still want to invest in and grow the business further.”

William, 55, is looking to undertake further training so he can specialise in hard floor care and carpet cleaning, areas that can help grow the couple’s business.

“William told me he has made a very good decision to join Crest. He’s also found it’s better for his health now he has a more physical job.

“He used to be sitting for long periods driving and there was no physical fitness aspect to his job at all.”

After receiving her seven-year long service award from CrestClean, Aroha, 50, a former caregiver, is proud of her achievements. “I never thought I’d get this far in business. I didn’t think I’d carry on past five years,” she says.