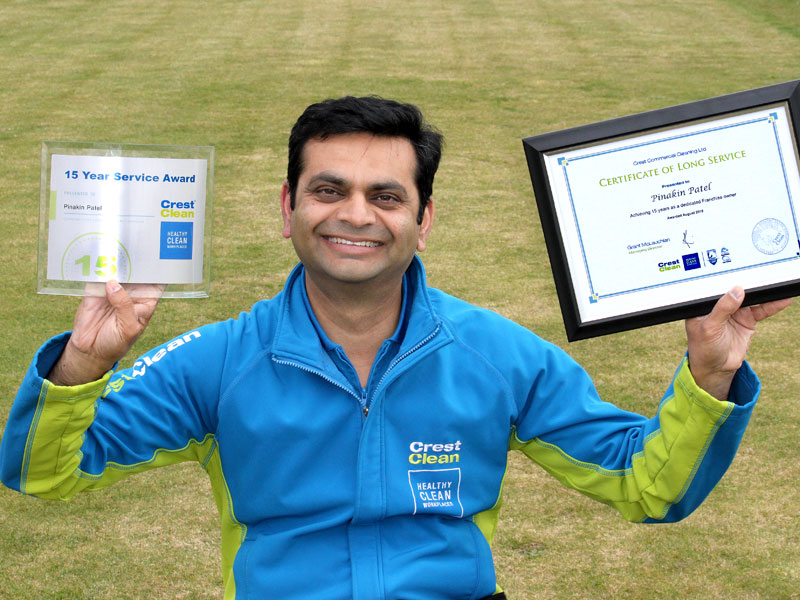 Pinakin Patel was the first franchisee in South Auckland when he started with CrestClean 15 years ago.

He didn’t need his accountancy skills to quickly figure out that cleaning could be a lucrative and rewarding career.

When Pinakin Patel moved to New Zealand in 2002 he had “an open mind” on which career path life would take him on.

He picked up a part time cleaning job in an Auckland restaurant bar and soon found the physical work a refreshing change from the accountancy positon he’d had in India.

“Day after day I found I was enjoying the work,” he says. “I realised it was a good business to carry on with. It was a safe and stable work and I liked the challenge.

“Cleaning is not just all physical, you have to use your mind to figure out the best way to do it,” says Pinakin, who has a bachelor of commerce degree.

With a desire to work for himself, he joined CrestClean in September 2003 and became the company’s first franchisee in South Auckland.

And he’s never looked back. Now 15 years later Pinakin in running a large family franchise in Tauranga and is passing on his knowledge to industry newcomers in his role as a regional trainer.

He’s seen major advances in the commercial cleaning industry over the years. “These days cleaning is very different and there is a lot more science behind the processes and products involved,” he says.

“When I started it was just the mop and bucket and a rag but now new technology is helping us work more efficiently and effectively.”

Although Pinakin ran a successful business in Auckland, the city’s often gridlocked road system began to impact on his work and he began to explore the idea of relocating.

“I was always worried about wasting time while I was sitting in the traffic. Almost every day I was losing one and a half hours.”

He’d visited Tauranga with his family – and they liked what they saw. “It was quieter place and the house prices were a lot lower than Auckland,” he says.

Since moving to the Bay of Plenty, Pinakin has increased the size of the family business tenfold. He and his brother Hitesh have become specialists in floor care.

Cleaning floors appeals to his perfectionist traits, admits Pinakin, who says he gets an immense degree of satisfaction from the job.

“With floors you can’t afford to miss anything. If you miss something it will show up and everyone will notice.

“I always get a feeling of great satisfaction when I’ve achieved a 100 percent finish. I won’t settle for doing just an okay job.”

Being a regional trainer for Master Cleaners Training Institute also brings a sense of personal pride. As well as inducting new franchisees into the practical side of cleaning, Pinakin enjoys passing on tips he’s learned from being a business owner.

“I encourage new franchisees to adopt the right mind-set. I always tell them to keep positive because as with any business, there will always be ups and downs.

“Don’t settle for 80 or 90 percent, always give 100 percent when you are working and you’ll maintain a good relationship with your customers.”

“Having people like Pinakin within the organisation raises the status of Master Cleaners and gives us credence in the market place.

“Pinakin is the epitome of success in terms of his hard work and dedication to customer service.”

“You can always rely on Pinakin and he always gives 100 percent to everything he does. He’s been a great mentor to other franchise owners and is very happy to share his knowledge.”