Secret to a happy marriage? Become a CrestClean business owner! 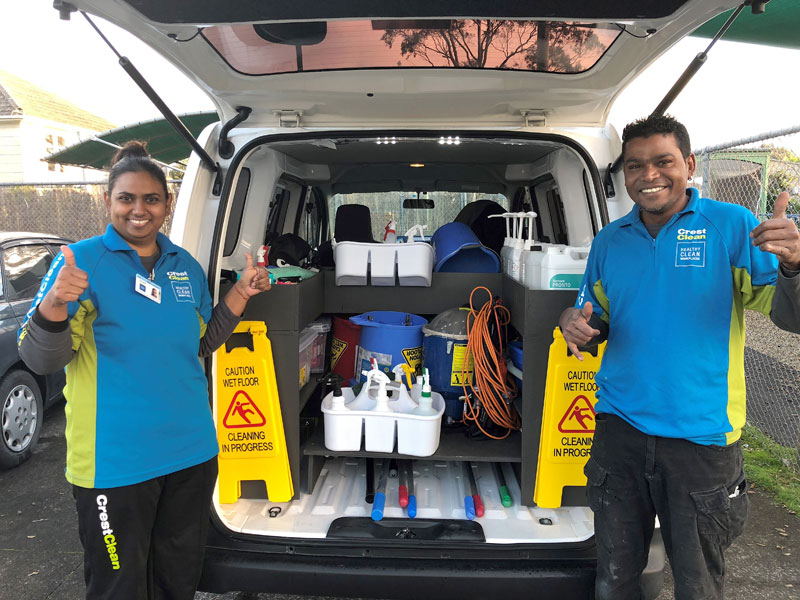 Vikashni Prasad and Atish Kishore love being business owners and say working together has brought them closer.

A married couple who bought a CrestClean business discovered a surprise bonus – it’s been a real tonic for their relationship!

Vikashni Prasad says working with her husband Atish Kishore has brought them even closer. “I think CrestClean has changed our life.”

During the daytime Atish has a job as an exterior painter but in the evenings the couple go out to clean for their CrestClean customers.

Vikashni says they not only enjoy the cleaning, they’ve discovered that working together is rewarding and fulfilling and is never ever dull.

“We always have fun while we are working. My husband jokes a lot and makes me laugh. We never get bored.”

She added: “Our relationship is closer than it was before we joined CrestClean.”

It’s a big change compared with how things were before they bought a cleaning franchise. The Auckland couple’s daily routines had once been poles apart when Vikashni was working at fresh food company and didn’t finish until 7pm.

With two young children it had not been easy to find much couple time, says Vikashni.

“It’s most important that a husband and wife have time to do things together. We were missing this moment,” she says.

A family friend, who is a franchise owner, introduced the couple to CrestClean after Vikashni gave up her job to spend more time with her children.

“We decided to go ahead and buy a franchise,” says Vikashni. It’s a move that’s worked out better than they expected. “Since we joined CrestClean we’ve noticed that it’s brought some healthy changes. We now have lots more time together,” she says.

The couple are banking on the extra income from their CrestClean business will put them in a position to be able to afford a mortgage.

Next year that home dream will be a step closer. They plan to increase the size of their business, with Atish making CrestClean his fulltime job.

“At the moment we are renting and we can’t afford to buy a home. One day we’ll be able to have our own house and have a bit of luxury as well,” says Vikashni.

Vikashni and Atish have got off to a flying start since joining CrestClean in February. They’ve impressed Julie Griffin, one of the company’s Quality Assurance Co-ordinators.

“They are a delightful couple. They have a great attitude to their business,” says Julie. “They are fiercely customer focused and they like to forge a really good relationship with their customers.”

And their commitment has not gone unnoticed among their customers. The couple recently cleaned a mobile medical clinic during its Auckland stopover, the quality of their work generating great feedback.

Dave Withell, service scheduler, Mobile Medical, praised Vikashni and Atish’s work. “We are very happy with the job they’ve been doing,” he says. “They are very conscientious and thorough with the cleaning.

“They’ve been flexible with their timing to work around us and we’re very impressed.”