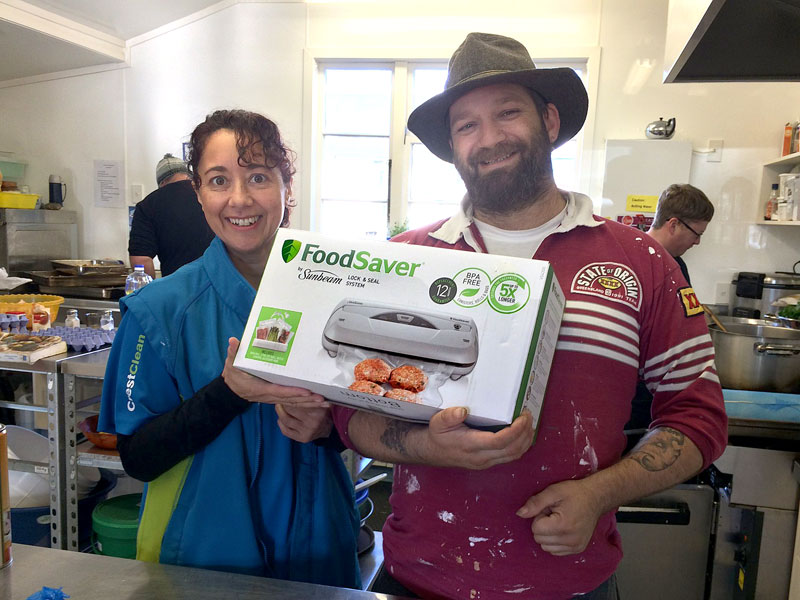 Trish Richards presents a vacuum sealer to Wayne Moss, a team leader at Loaves and Fishes.

A rallying call encouraging CrestClean’s Nelson personnel to help out in their local community struck a chord with Trish Richards.

Trish, who has undertaken volunteer work for charitable organisations before, dropped in on Loaves and Fishes, a community meals project in central Nelson.

“I enjoy helping out where there’s a need and this is something that’s close to my heart,” she says.

Trish leapt to the challenge after her sister, CrestClean’s Nelson Regional Manager Barbara de Vries, urged cleaning team members to volunteer some time to support a local worthy cause.

And Trish’s visit to Loaves and Fishes couldn’t have been more timely, says Alison Mountfort, the scheme’s project coordinator. The busy kitchen, where scores of meals are prepared each week, was in need of a volunteer prepared to take charge of the pantry.

“I had been keeping an eye out for someone who would fit that skillset,” says Alison. Trish spends about two hours a fortnight ensuring the pantry is organised and none of the donated foodstuffs goes to waste.

“Trish is doing a wonderful job. It works for her and it’s certainly working for us,” says Alison.

Soon after joining the Loaves and Fishes volunteer team, Trish quickly spotted there was a need for a device that puts an airtight seal on plastic bags used for the storage of leftover food.

“I approached Barbara to see if we could donate a food sealer and she was delighted to help out,” says Trish.

The vacuum sealer was gratefully received, says Alison. It was soon put to use when a heap of donated cashew nuts had to be bagged and stored. “We put them in vacuum packed bags and that way they’d last a whole lot longer.”

Nelson’s Loaves and Fishes was started back in 1987 by Archdeacon Malcolm Welch, the vicar of All Saints at the time. The idea behind it was to reduce the ever growing gap between the haves and the have-nots. Malcolm also began the night shelter at the same time on what had been the All Saints picnic lawn.

Over the past 30 years thousands of people have come to a midday meal at Loaves and Fishes.

“Currently we provide full dinner-type meals on a Tuesday, Wednesday and Thursday at noon so that at least on the middle three days of the week no one in central Nelson need be hungry or lonely at lunchtime,” says Alison.

Diners are asked for a small contribution that helps towards the running of the project, which is otherwise funded from community donations and grant applications made to funding organisations approved by All Saints .

A lot of the donated food arrives via Kai Rescue, part of the Nelson Environment Centre. “Most has come from supermarkets and retailers. It’s food that’s reached its expiry day but it’s perfectly ok to use,” says Alison.