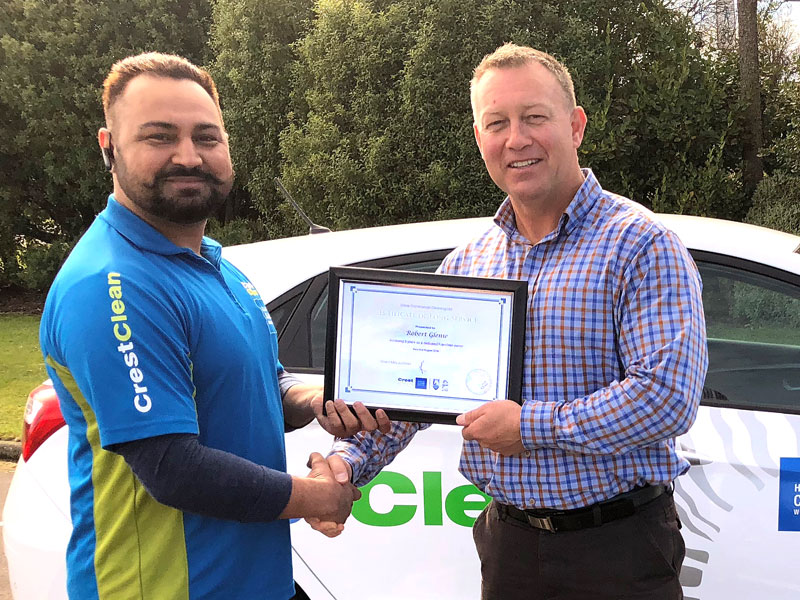 It was handshakes all round when two colleagues celebrated reaching their three-year milestone with CrestClean.

But for Robert Glenie and Randeep Singh, the pair’s pathway to success couldn’t have been more diverse, each having worked in different industries before joining the company.

Robert had been a builder before being appointed as CrestClean’s South Canterbury Regional Manager. And Randeep had been employed at a local freezing works prior to becoming a CrestClean business owner.

When Robert joined CrestClean he was following in the footsteps of his mum, Dawne Glenie. With more than 40 years’ experience in the commercial cleaning industry, Dawne was affectionately known as the “Queen of Cleaning” and was a trainer for Master Cleaners Training Institute.

It was while working on Australia’s Sunshine Coast that Robert developed an interest in cleaning. “I was head of maintenance, cleaning and security at three shopping centres,” he says. “It was pretty busy as I was in charge of 100 staff.

“I really enjoyed that industry and after returning to New Zealand I was keen to get back into that type of work in some form.”

After moving to Ashburton he worked for some time as production manager at a precast concrete company. But when an opportunity for a regional manager position popped up with CrestClean, Robert jumped at the chance to become his own boss.

“I liked the idea of putting my future in my hands and having control of what I did,” he says.

He says at times working in the building industry had been incredibly frustrating. “You had to be at work for 10 hours a day whether you had 10 hours work or not.

“There was a lot of time where you were unproductive and I really hate being somewhere if you’re not being productive.”

His CrestClean work is rewarding, and he says he loves the customer interaction side of his role as a Regional Manager. He particularly enjoys the feedback from new customers when they get to experience the superior service and high quality cleaning from the CrestClean teams.

“I’ve been amazed that some people have been prepared to put up with a very poor cleaning service for many years thinking it was the norm.

“It’s pleasing when you can solve people’s cleaning problems, particularly when they don’t realise they have a problem in the first place!”

Randeep says he hasn’t looked back since he and his wife Kiran joined CrestClean. Before he bought a franchise, Randeep had a spell working in a fish factory and then spent two years at a freezing works. He then decided it was time to become his own boss.

The couple’s commitment to CrestClean has impressed Robert. “Randeep and Kiran and I have worked very closely over the past three years growing the region and their business together.

“When I need something Randeep is always there to help out,” Robert says.

“I enjoy watching Randeep and Kiran go from strength to strength in their business. From renters to now buying their first home, and it’s all thanks to hard work and the CrestClean system.”

Randeep and Kiran are soon to move into their first home. Later this month they will take possession of a renovated 1970s house in Timaru. “It’s a big home and it has three bedrooms and a double garage, it even has a spa pool,” says Randeep.

“We so excited and very happy to have a place of our own. Before we were with CrestClean we couldn’t get a bank loan because I didn’t have a permanent income.” 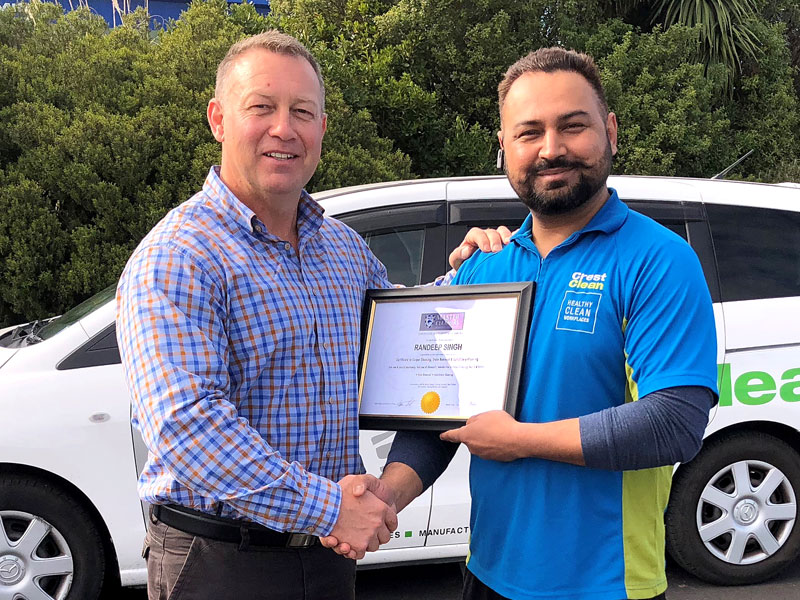 Robert Glenie presents Randeep Singh with a certificate from Master Cleaners Training Institute for an upskilling course in carpet care.