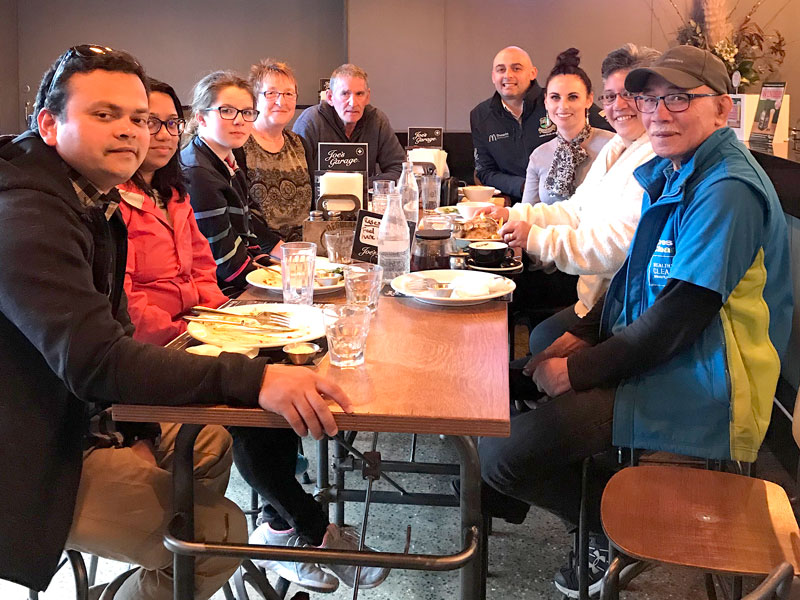 Owen and Carolyn Smithson (centre) with their CrestClean Dunedin collegues at a farewell lunch.

Close colleagues turned out to farewell Owen and Carolyn Smithson who have recently retired after more than a decade of being CrestClean business owners.

A special lunch was held for the Dunedin husband and wife team, where Regional Managers Tony and Nicky Kramers thanked them for their hard work and dedication over the years to their CrestClean customers.

“Owen and Carolyn have been wonderful franchisees to have as a part of our CrestClean Dunedin family and their clients think so too,” says Nicky.

It was 12 years ago that a chance conversation while playing ping-pong proved to be a real game changer for Owen.

His opponent, who owned a CrestClean business, began chatting about work and how he liked being his own boss and having flexible hours. He told Owen about the other benefits that being a franchisee gave him, such as the guaranteed regular income and the security of fulltime work.

The more he listened, the more Owen liked what he heard. “I used to play table tennis with a guy who had a CrestClean franchise and basically it just went from there,” says Owen, who at the time was in his mid-50s, jobless and finding work opportunities were few and far between.

Owen’s wife Carolyn, who had been working at a local food manufacturing company, was open to joining her husband in a joint venture to buy a CrestClean business.

“The decision was made that we do this together,” says Owen. But working together for the first time brought new challenges for the husband and wife team.

Owen laughs about it now but admits “it was a learning curve, especially for the husband!” He had to mind his Ps and Qs, he says, “And yes, I did learn the hard way a few times!”

The couple chose to specialise in cleaning kindergartens and schools, enjoying time off during schools holidays.

“In the early days we were doing something like nine kindies a night.” says Owen, He says they found cleaning was tough at first – but they soon got quicker and became more efficient at carrying out the tasks.

Having their own business gave them flexible hours and a lot of time off, Owen says. “We have a caravan in North Canterbury and we got to go there three or four times a year. It was great and it worked out really well.

“One thing about CrestClean is that it gives you a pretty good income, especially if you’re not qualified at anything,” says Owen, who used to work in the hardware industry.

When the couple joined CrestClean the cleaning industry was very different and unlike today, there was little or no training for newbies.

“In those days 12 years ago you got your gear, your keys and you got let loose on the world. There was no such thing as training. As the years have gone by things have changed a lot and the training now is really good.”

So what’s been the biggest change he’s seen? “One of the best things was when CrestClean brought in microfibre cloths. They are brilliant and it was a great thing when we started using them.”

Owen, who is now 66, says being a business owner with CrestClean had been a lot easier that he had first thought. “The beauty of CrestClean is the system of payment. You don’t have to bill anybody or text them for the money.

“You just do the cleaning and you get paid and there’s no hassle. It’s a brilliant system.”