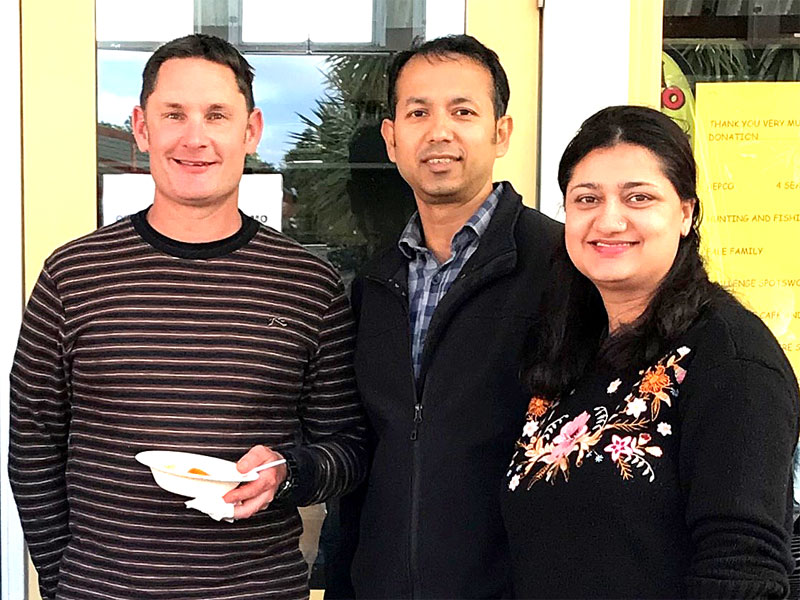 Demand for their homemade chicken dumplings saw CrestClean’s Prasun and Diksha Acharya rushed off their feet trying to keep up.

It’s the second time Prasun, the company’s Taranaki Regional Manager, and his wife have run a food stall at the annual fundraiser for Spotswood Primary School in New Plymouth.

The couple worked flat out, cooking and plating up the tasty treats as hungry visitors queued for the exotic steamed delicacy. And their efforts quickly brought the cash rolling in, with the final figure raised standing at $325.

“We sold about 70 plates of dumplings and a lot of people were keen to try them,” says Prasun. “Some visitors were even coming back twice to buy more dumplings.

“I think people were keen to try something exotic that is also quite healthy as well.”

Prasun and Diksha are originally from Nepal where steamed dumplings are popular. Last year the couple raised $682 at the school gala day.

The event provides an opportunity for CrestClean to show its support and give something back to the wider school community, says Prasun. “We are extremely proud of the close relationship that we have with all our school customers.”

School Principal Mark Fisher was delighted by Prasun and Diksha’s contribution the fundraiser.

“They always go above and beyond. They didn’t have to help out but they did. They are great people and all the cleaning staff are amazing, we are really pleased with CrestClean.”

The dumplings were a big hit with school staff and visitors, he says. “They were very popular last year and it didn’t surprise me that they were popular this year as well. We’ve always tried to have a range of different food available.”

Marks says the Cultural Extravaganza was a great success. “We really pleased with the result and we raised about $3,500 for our school community.” Money raised on the day would make a significant difference to school life, he says.