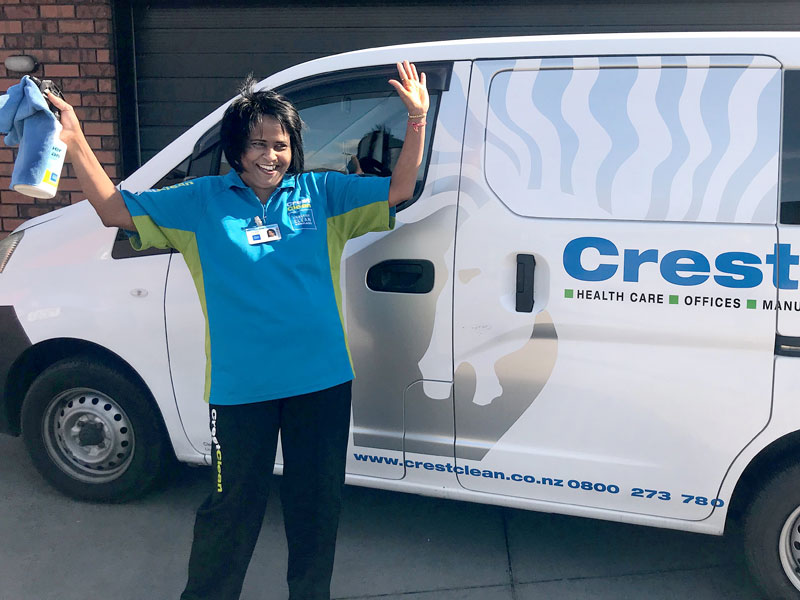 Rina Chand takes great pride in her business and keeping her Nissan NV200 shiny and clean.

For so long having her own business had remained beyond her reach for Rina Chand, who never ever gave up hope of one day being her own boss.

Now, thanks to CrestClean, the former clothing industry worker is loving her new life as a business owner. “It was my dream to be able to have a business for so long,” says Rina. “It’s the best job I’ve ever had.”

Rina enjoys the lifestyle she’s achieved by being part of the CrestClean team in Palmerston North. It’s a far cry from the long days she used to work as a machinist. “Before I had my own business I was working up to nine or 10 hours a day and it was not good money.”

Flexible hours has also brought a new freedom, she says. “Now I get to spend a lot of time with my family before I have to start work.

“I do about five or six hours in the evenings and the work is enjoyable.”

Rina’s daughter, Reema, also helps out by lending a hand with the cleaning. The pair have been praised for the high quality of their work. Shareen Raj, CrestClean’s Palmerston North / Kapiti Coast Regional Manager, says they are a great team.

“They take a real pride in doing the cleaning and they are an awesome team to work with.

“It was Rina’s dream to have her own cleaning business and she does a fantastic job for her customers.”

Reema, who works at a local Countdown as a duty manager during the daytime, is proud of her mum’s achievement. “She’s finally got there. It just shows that dreams can come true.”

Doing the best job possible is rewarding, says Reeema. “We recently had some feedback from a customer who said they were really happy with what we do.

“It felt really good to know that we must be doing a good job. It was awesome and brings a lot of personal satisfaction for us.”