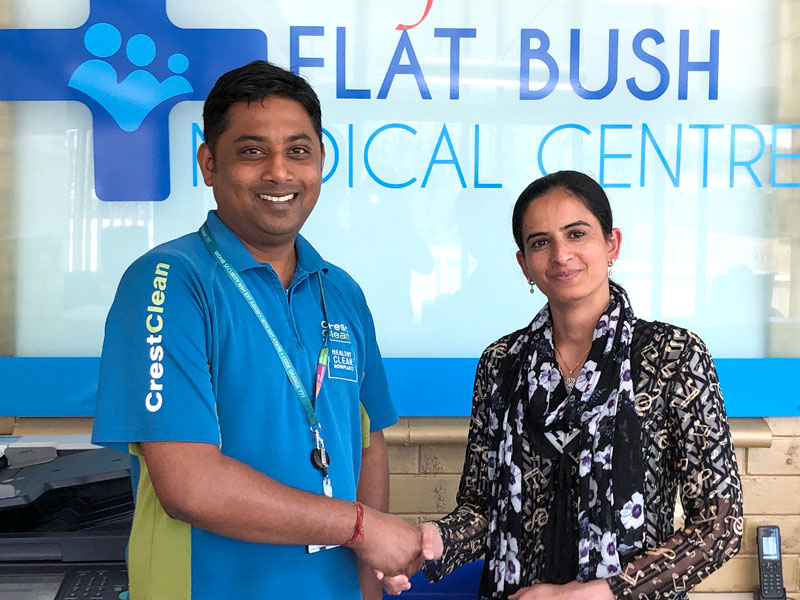 Shiva Nacker is thanked for his hard work by Satwinder Kaur, the centre’s administrator and receptionist.

An Auckland doctor has paid a heartfelt tribute to CrestClean business owner Shiva Nacker for his quick response after a burst pipe flooded his surgery.

Shiva rushed to Flat Bush Medical Centre after receiving a plea for help in an early morning call from GP Dr Hubert D’Cruze, who had discovered the building was waterlogged when he arrived for work on Monday.

Using a special vacuum cleaner that can suck up water, Shiva immediately got to work in a race against time so staff at the busy centre could get in.

Satwinder Kaur, the centre’s administrator and receptionist, said Shiva had saved the day as without his help in mopping up they wouldn’t have been able to see patients.

“We couldn’t start our work because we couldn’t enter the clinic but within a couple of hours we were able to get in and start work.”

Shiva, who says he was just happy to have been able to help out, was personally thanked by Dr D’Cruze. “He said ‘words can’t express how much help you were to us’,” said Shiva.

The drama unfolded after Dr D’Cruze called Shiva at 7.30am “He said he really needed my help as the clinic is flooded,” says Shiva.

Water from the bust pipe had filled the building, affecting nearly every room. “The clinic is closed at the weekend so you can imagine how much water was there,” says Shiva.

“When I got there it was so deep that it covered my shoes, it was probably 9-10cm deep.”

He found Dr D’Cruze in the reception area with a mop and a bucket in hand. “He looked a bit shocked.

“I told him just leave it to me. I had my wet vacuum with me so it made mopping up easier and quicker.”

Satwinder says the leak from the kitchen was extensive and there was water everywhere. “Not only in the kitchen, it came through the reception, waiting area, doctor’s room and nurse’s room. The whole of our clinic was affected – the water was quite deep.”

Although a plumber was called in to deal with the leaking pipe, problems didn’t end there. Overnight a further leak caused more flooding – with Shiva getting another early call from Dr D’Cruze.

“The next day the doctor called me again and I saw his number come up on my phone,” says Shiva. “I didn’t even bother answering it, I put on my T-shirt and drove there straightaway.

“He was very glad to see me and he said ‘I don’t know what has happened, it’s the same thing all over again’.”

But this time the flooding was not as extensive and it took less than an hour for Shiva to mop up.

Linda Hill, CrestClean’s Auckland East Regional Manager, says Shiva is a superstar. “I’m delighted to have people in my team who care so much about their customers and go the extra mile. Shiva is a hard worker and just a real gem.”