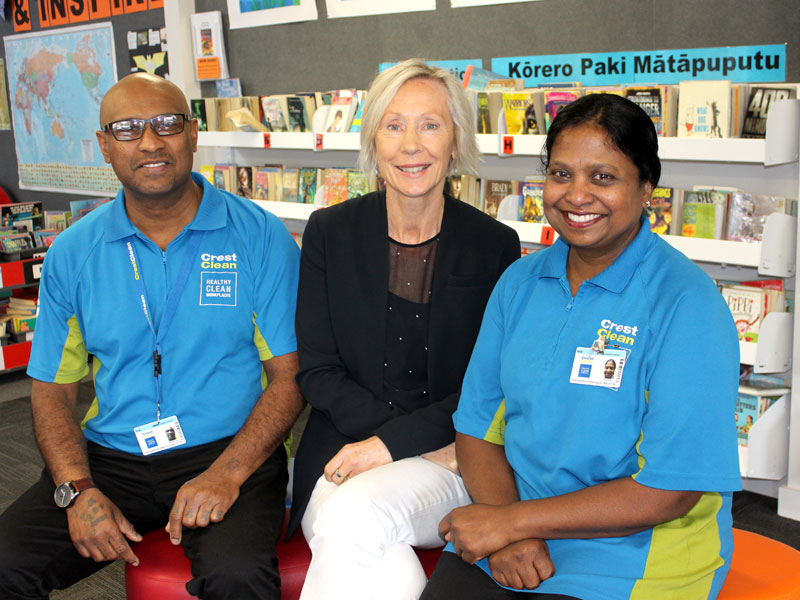 KayTester, Principal at Sts Peter and Paul School, Lower Hutt, is delighted with the work carried out by CrestClean’s Gyaneshwar and Anzila Dass.

A principal has showered praise on CrestClean couple Gyaneshwar and Anzila Dass and says they do a fantastic job at her school.

“They are a wonderful team and are they are very much part of our school community,” added Kay Tester, Principal at Sts Peter and Paul School, Lower Hutt.

Kay says her previous school also had CrestClean personnel looking after the cleaning arrangements. The friendly attitude and the commitment to the job shown by CrestClean business owners is outstanding, she adds.

“My experience with CrestClean has been over a number of years. What I really like is the fact that the people are so well trained.”

She says Gyaneshwar and Anzila, who have been franchisees for almost two years, give 100 percent to their work. “They are absolutely committed to doing a good job because they are invested in it and take great pride in their work.”

Kay says a CrestClean reward initiative, which encourages kids to be tidy and think about their environment, has also been a big success at her school.

The Cleanest Classroom competition is run at many of the 430 schools that are cleaned by CrestClean franchisees. The classroom that is kept the cleanest in the school is awarded a certificate and a prize at the end of each term.

Kay says the competition helps to encourage the children to think about the work of the people who keep their school clean.

“When the children arrive each morning the teachers ask them to make an effort to be tidy and to help these really important people who look after their school.”

As well as the day to day cleaning, CrestClean also takes care of the end of term cleaning when more in-depth cleaning can be carried out

Kay says she can be confident the job will be done to a high standard, with the final inspection being carried out by one of CrestClean’s Quality Assurance Assessors. It’s one less thing to think about, she says.

“I really like the fact that after the term clean somebody comes in and does the auditing. It’s a good level of accountability rather than me having to do it. It’s an endorsement of the work.”

“Their work is outstanding and they look after the school as though it’s their own home.

“They are well respected by everyone there and are treated like part of the school staff. They just do a terrific job.”