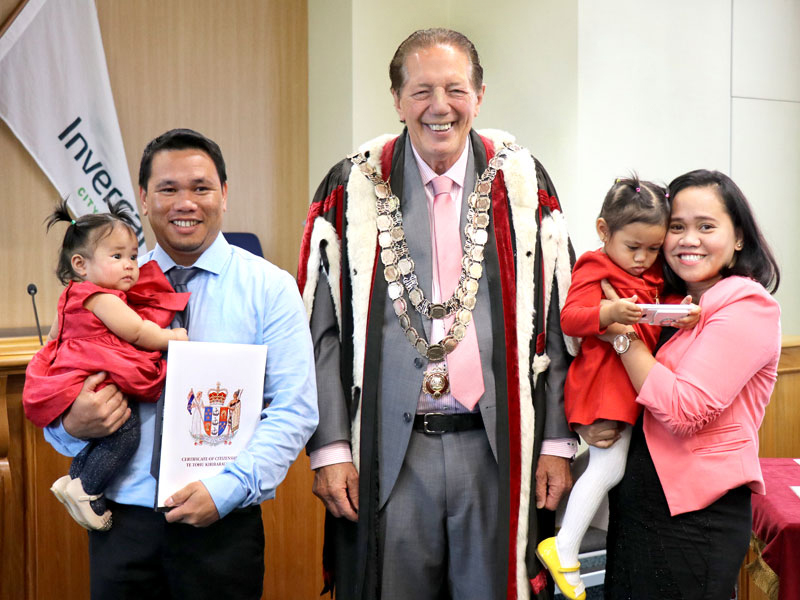 It was a landmark day for the Novilla family when they became New Zealand Citizens at a special ceremony in Invercargill.

CrestClean business owner Cons Novilla, who is originally from the Phillipines, says it was an occasion that he and his wife Christine will long remember.

“It was a big achievement for us and a very satisfying feeling. I feel secure and we now have peace of mind that we can stay here and our kids can enjoy the Kiwi lifestyle.”

The couple, who have two young children, attended a civic ceremony in Invercargill to welcome those who have become New Zealand Citizens.

Invercargill Mayor Tim Shadbolt, who presided over the official ceremony, gave everyone a warm and heartfelt welcome, wishing them well in their new life, says Cons.

“He was really nice and said ‘thank you for choosing New Zealand as your new home’.”

Cons came to New Zealand eight years ago. He had been working as a graphic designer in the Philippines when he got itchy feet. Looking for a change, he saw advertised an opportunity to be involved in the dairy industry here.

It was just the break he needed – so he applied, packed his bags and in 2008 headed to the deep South of New Zealand where he started work as a dairy farmer in Riversdale.

The next move was to a bigger farm in Tuatapere, which was about the time he was introduced to his now wife, Christine.

Christine was living in Dubai at the time, where she had been for five years working as an accountant. They had corresponded for a number of years and she finally made the move to New Zealand where the two were married.

When Cons saw an opportunity to purchase a CrestClean franchise he jumped at the chance. The prospect of the flexible hours, guaranteed income and the extra time that he would have to spend with their planned family were his main reasons for going ahead.

Owning a CrestClean business meant Cons could say goodbye to the early starts and long days he’d endured in dairying.

“I used to start work at 4am and not finish until 5pm or even later during busy times,” he recalls. “Now I don’t have to wake up early in the morning and go out in rain, hail and snow.”

Glenn Cockroft, CrestClean’s Invercargill Regional Manager, said he receives great feedback from Cons’ customers. “He really does go the extra mile for all of them and is a great member of the Southland CrestClean team.”

The couple have two children aged 2 and 6 months. Cons says he’s very grateful for the lifestyle that they now have, which allows a lot of family time to be spent together.

“With a CrestClean business you don’t have to work long hours. I have the whole morning with the kids before I start work and I can help my wife.”