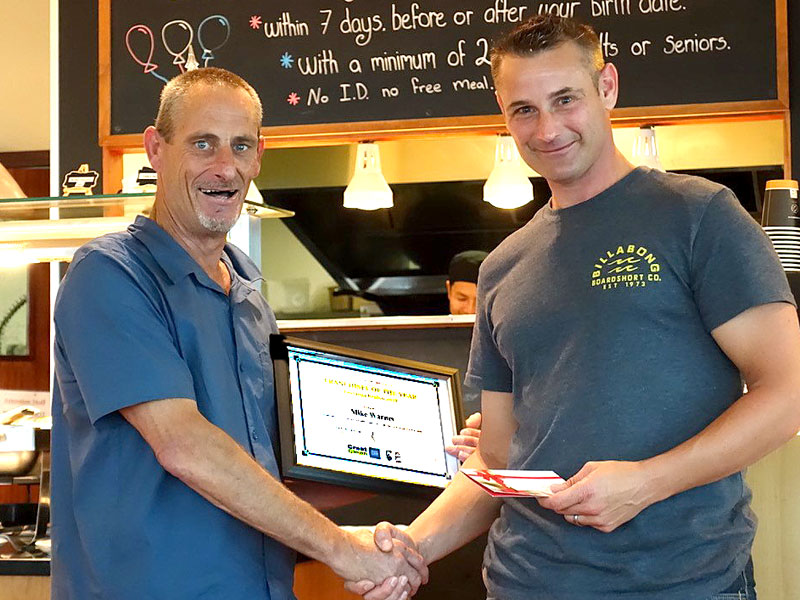 Mike Warnes receives the Tauranga Franchisee of the Year award from Jan Lichtwark.

Winning CrestClean’s top award for the Tauranga region has capped off a stellar year for franchisee Mike Warnes.

Mike, who has a Crest PropertyCare business, admits he was stunned to find out he was Tauranga Franchisee of the Year. “I certainly didn’t expect to win,” he says.

“I guess I’ve put a fair bit of effort into making this work, but you have to when you buy a business.

“I know there are other franchisees in Tauranga who work really hard, so getting this award came as a total surprise.”

Jan Lichtwark, CrestClean’s Tauranga Regional Manager, says Mike is an outstanding franchisee. “He’s just so passionate about what he does and he really communicates well with his customers. His background in the building industry has been a great asset.”

Problem solving is one of his many strengths, says Jan. “He not only identifies a problem, he will always have a solution that he’s thought through.”

And his “never say no” attitude is testament to Mike’s dedication to put customers first, he says. “If you ask him to do a job he’s always willing to do it.”

Mike, who used to work in the construction industry, says having a CrestClean business is incredibly rewarding. “I’ve never been happier in a job. I just wish I’d done this years ago.”

Also in the limelight is CrestClean business owners Vishaal Narayan and his wife Shabnam, who picked up the title of Tauranga Rookie Franchisees of the Year.

The couple not only provide a professional service to their customers, they communicate well and really go the extra mile, says Jan.

“They have worked really hard and in less than a year since joining CrestClean they have doubled the size of their business. It’s an outstanding achievement.”

Vishaal is a manager for VTNZ in Tauranga. He says having a CrestClean business works well and provides additional income for the family. “It’s something I can do in the evenings that won’t impact my work.”

Winning the Rookie Franchisees of the Year came as a total surprise and he was “rapt” he says – but it didn’t immediately sink in when his regional manager got in touch to congratulate him.

“Jan gave me a call but at first I didn’t really quite understand what he was talking about.”

His wife also took a bit of convincing when he broke the news to her that they had won, he says. “’You are kidding me’, was her response!”

Achieving excellence in the work place is nothing new for Vishaal and Shabnam as they’ve both picked up accolades in their day jobs. Vishaal has been VTNZ’s employee of the month and he was also top of the class during his training with the vehicle inspection company. Shabnam, who works in the aged care sector, was diversional therapist of the year for Bupa.

A big factor in the way they operate their CrestClean business is focusing on what makes a customer happy, they say.

“It’s not all about dollars and cents it’s about retaining our customers,” says Vishaal. “The customer comes first and we try to see what their needs are.

“What extra things you can do for them that makes the journey with you a pleasure for them.” 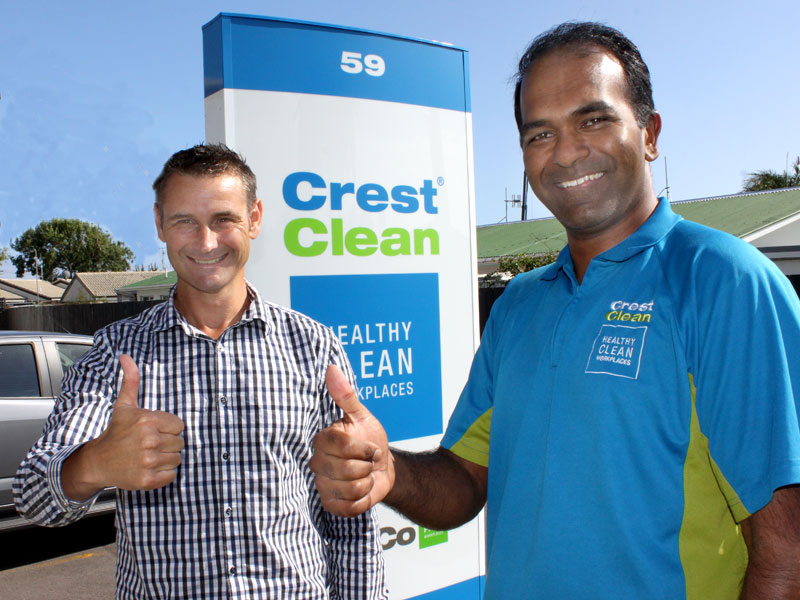 Vishaal Narayan and his wife Shabnam picked up the title of Tauranga Rookie Franchisee of the Year. He’s pictured with Jan Lichtwark, CrestClean’s Tauranga Regional Manager.