Beyond the job: Unsung hero recognised for community work 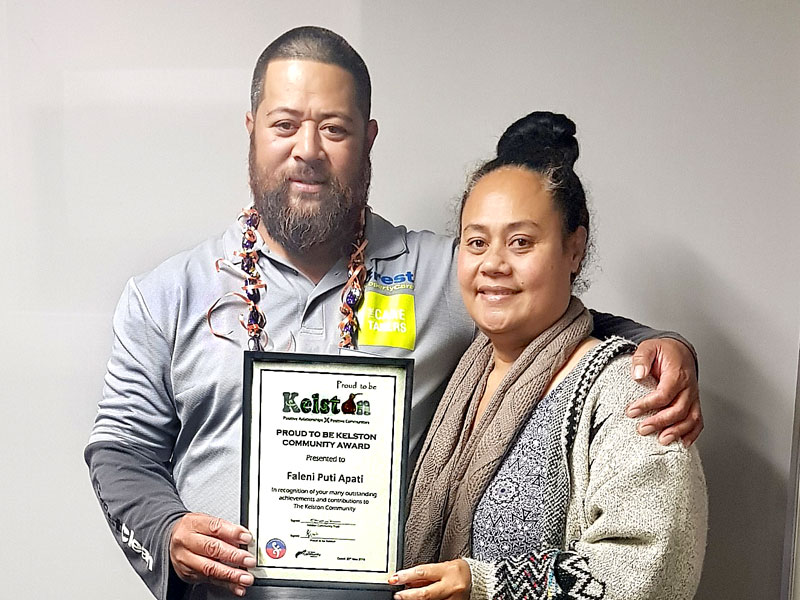 Puti Apati and his wife Seiolita with their community award.

When kids turn up to school without shoes it tugs at his heartstrings and in his mind’s eye he pictures his own upbringing in Fiji.

As the school’s property caretaker, Puti Apati is a popular figure and he gets to know most of the children attending Kelston Intermediate School. But it’s the kids from homes where money is tight who particularly strike a chord, he says.

Not wanting to make any fuss, and in an extraordinary act of kindness, Puti often buys shoes and provides lunch money for the youngsters he sees who are struggling and could benefit from a helping hand. It’s something he does discreetly off his own bat, to spread a little cheer to those facing hardship.

He understands the embarrassment some kids go through if they come from broken or troubled homes where there’s little precious money for the life’s bare necessities.

“I myself came from a poor background. We grew up with nothing and I really understand the situation,” says Puti, recalling his childhood in Fiji when he had to walk barefoot for a mile each day to catch the school bus.

“I know exactly what’s going on in their head. When these kids come to school they’ll see other kids wearing school shoes and being able to buy lunch or an ice block.

“It motivates me that they are just kids and need help. I do it without thinking. I feel sad to see kids in a situation like that.”

Sometimes he will put on a lunchtime barbecue at school or sausage sizzle to provide a simple lunch for kids who haven’t got money to lunch.

Up until recently he’s been something of an unsung hero. But Puti unexpectedly found himself in the spotlight when he was honoured at a special ceremony by Kelston Community Hub.

He was nominated for a “Proud to be Kelson Community Award” by Kelston Intermediate School Deputy Principal Kiri Laing, who says Puti is much valued member of the close-nit school family.

“If he sees a need he’ll try to fill it. If he can’t, he’ll find somebody who can,” Kiri says “Our kids see him as not just the caretaker but as someone who offers community support.

“We nominated Puti for the extra work he’s put in while we’ve had different things going on at the school and for looking after the school grounds and the hard job he does.

“Whenever we organise anything at night he’ll stay on and lock up after us and make sure we all get home safely. It’s all the little things that he doesn’t get paid to do but we really appreciate.

“He’ll go out of his way to do anything for us and because he’s Tuvaluan, and he’s lived in Fiji and a lot of different pacific places, he finds it easy to get on with our community.”

Puti says the award came “as a total surprise”. “I didn’t know I was getting an award. It was an honour to receive it for the community.”

“Whatever you do, do it with all your heart, mind and soul, you never know what is waiting for you. For me, it was beyond my expectations.”

In addition to his positive philosophy about work, Puti says having a large family also motivates him. With seven kids – six boys (including a set of twins) and one girl – he says the big household is a driving force.

Providing better educational opportunities for his children was the reason Puti and his wife Seiolita moved from Fiji to New Zealand in 2007. “In Fiji, we had a little bit of struggle,” he confesses.

“So my wife and I decided to move and we’ve never regretted it. I really miss home – there’s no place like home – but for the future of the children, we put aside what we like in order to put them first, so they don’t have to go through what we went through.”

Caroline Wedding, CrestClean’s Auckland West Regional Manager, says Puti is one of kind. “I couldn’t be more proud. He is a great ambassador for his family and the CrestClean brand.”