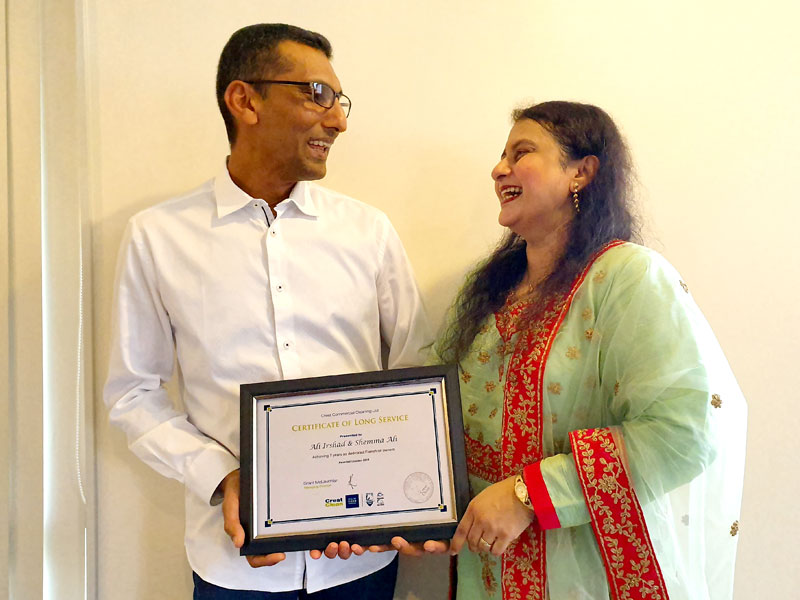 When Ali Irshad and his wife Sheema bought a cleaning franchise they made a slice of CrestClean history by becoming company’s first business owners in West Auckland.

Initially their franchise was a small venture that they fitted around their full time jobs, carrying out the cleaning in the evenings. But as the company grew its customer base, the couple seized the opportunity and took the plunge to go full-time with CrestClean.

And it’s certainly paid off for Ali and Sheema. Now, seven years later, they own a successful business, their turnover has increased fourfold and they have many happy customers.

Asked what is the secret to building a successful business and Ali has a very simple answer: “Deliver the same level of great cleaning every day!”

CrestClean came onto their radar through a family connection. A niece and a nephew had a CrestClean business in South Auckland, says Ali. It soon dawned on them cleaning offered a chance to create something for themselves.

“We made up our mind to start a part time cleaning business although we would still keep our day jobs to see how we go.”

At the time Ali, an automotive technician, was working for VTNZ as a compliance vehicle inspector. Sheema, meanwhile, had a job as a night supervisor for a food manufacturing company.

“She was doing the graveyard shift and I was doing day shift. We didn’t see a lot of each other,” says Ali.

Joining CrestClean has been “life changing” and given them a lot more time together, says Ali. “It’s really great, I don’t think I would ever be able to go back to working for someone else again.”

By being business owners, they are more financially secure and they’ve been able to buy a bigger home and create a better future for themselves and their two teenage children.

Although there was a steep learning curve joining CrestClean, the effort they put in to retrain in a new industry was worth it, they say. “It was a totally new thing to do, and it was challenging at first but I had a good trainer and we soon learned what to do,” says Ali.

He says with CrestClean they felt a real sense of pride from the beginning. “We never thought of ourselves as cleaners from the start. We always thought ourselves as business owners.

“We thought ‘we have invested money in this business and we are not working for anybody else, it’s our own thing’.

“What I’ve learned is if you keep up the good work, keep up the quality every day, then you don’t have any stress.”

“I just love the role,” says Ali. “It’s great meeting new people and showing them the latest techniques and passing on the things that I have learned.”

“They deserve all the success they’ve created. They’ve achieved so much with their business for their family. They have a lovely new four bedroom home and it’s all thanks to the hard work they’ve put in with their CrestClean business. I’m so delighted for them.” 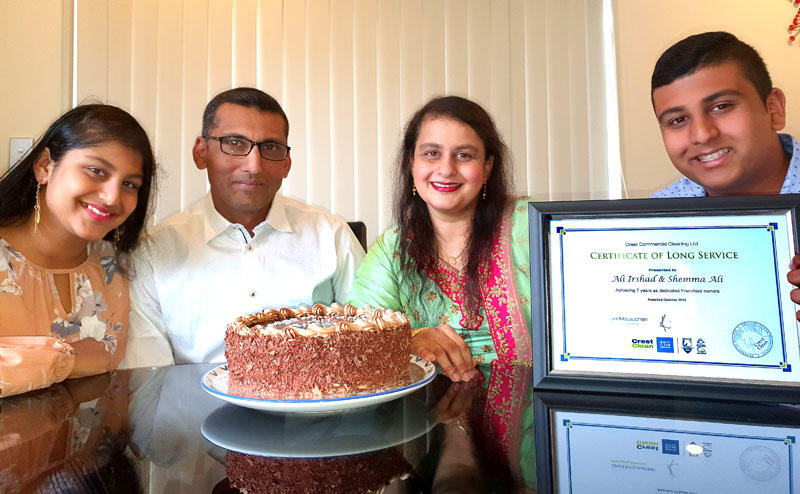 Ali and Sheema celebrate with their children, Ijaaz, 16, and daughter Saleha, 13.