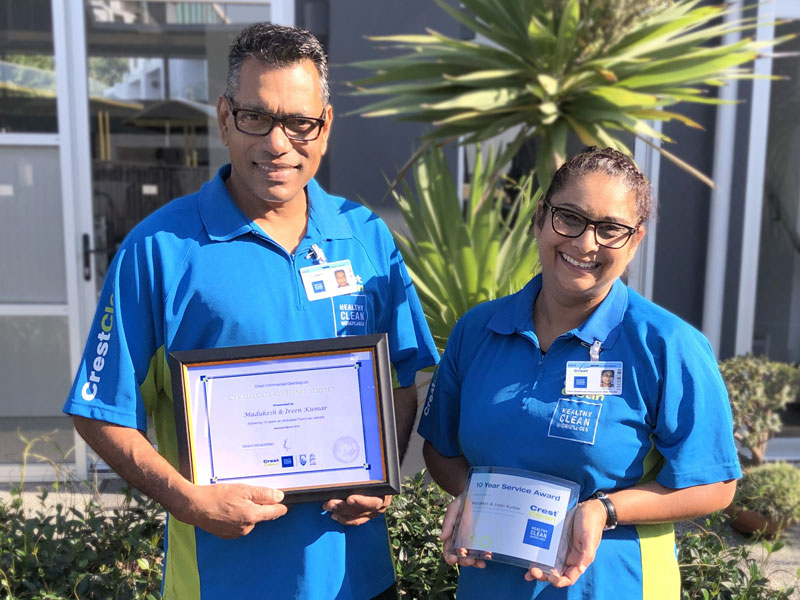 Madukesh Kumar and Irene Roshni with their long service award.

Buying a home of your own is a major achievement but imagine the satisfaction of being mortgage-free years earlier than you expect.

That’s the situation CrestClean business owners Madukesh Kumar and Irene Roshni were able to achieve, helped by the extra income generated by their cleaning franchise.

During the daytime Madukesh works as a logistics coordinator for a screen printing company and his wife is a health care assistant.

“I am delighted to have these two as part of my team. Their standard of cleaning is very high and of course their customers love them.”

Madukesh and Irene, who have just clocked up 10 years’ service with CrestClean, joined after hearing first-hand about the company from two of Madukesh’s relatives. His cousins, Anand Sharma and Geeta Sharma, had just bought their CrestClean business two months beforehand, and they encouraged Madukesh and Irene to do the same.

Now a decade later Madukesh says it was a great move and being a business owner is satisfying. “It’s a really great feeling and we are very happy with everything.”

The couple have long-standing relationships with many of their customers, including four contracts they’ve had for the past 10 years.

Maintaining a high standard of work and getting good feedback from their customers brings a lot of satisfaction, says Madukesh. “It’s an amazing feeling when we hear that we’re doing a good job.”

To mark reaching their 10-year milestone with the company, the couple received a $2,500 bonus from CrestClean.

“We will certainly do something to celebrate our 10 years with CrestClean,” says Madukesh. “We’ll most likely put it towards our next holiday.”