Following in their footsteps inspired by ‘dream’ lifestyle with CrestClean 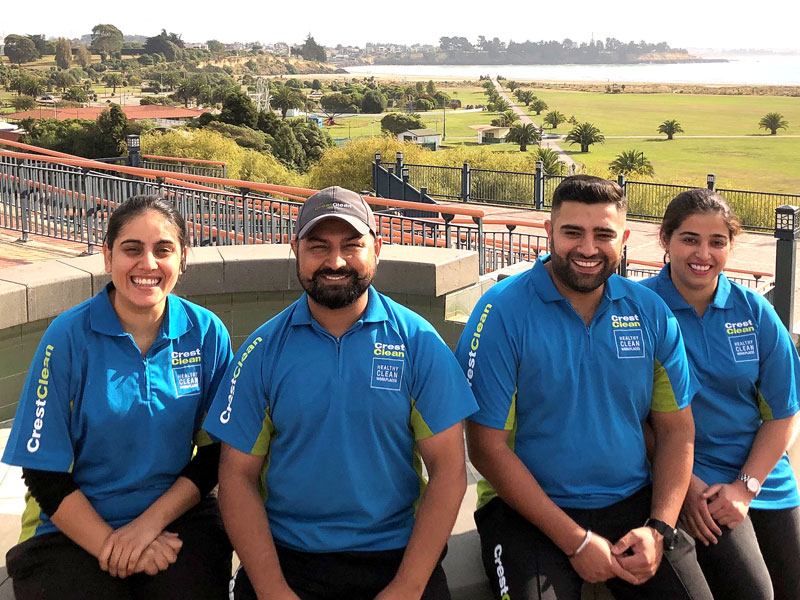 They were eager to join CrestClean after seeing how another young Timaru couple’s fortunes had changed through becoming business owners.

Although they had never met them, Tej and Samreen Dhillon got to discover a lot about Kiran and Randeep Singh through following posts on social media and reading stories about them featured on CrestClean’s South Canterbury home page.

They’d seen how joining CrestClean has been life changing for Kiran and Randeep, bringing the satisfaction of being their own boss with the opportunity to expand the business and increase their income.

However, it was a story about the husband and wife buying their first home, thanks to the success of their CrestClean business, that really struck a chord, says Samreen.

“I was definitely inspired by their story. They’ve achieved so much in such a short time and they are really happy.”

Excited at the prospect of buying a business, they made an appointment to see Robert Glenie, CrestClean’s South Canterbury Regional Manager.

Robert says Tej and Samreen had already decided that CrestClean was the business for them. “They’d seen the articles about Kiran and Randeep who were living the lifestyle they were wanting.

“They then completed three weeks of induction training in Timaru and they are now running their own CrestClean business.”

Tej and Samreen soon met their new work colleagues as the couple’s induction training was carried out by Kiran and Randeep. The four quickly discovered they have a lot in common, says Tej. “We are all from the Punjab and share the same culture, so we soon became friends.”

Tej and Samreen, who have two young children, had moved to Timaru from Christchurch when Tej bought a courier run. But the business meant long hours that cut into family time.

“The courier business did not provide enough for our growing family and we needed something that would increase our income,” says Samreen.

Samreen, who found work as an assistant manager in a women’s fashion store in Timaru, decided to search for something that would give them a better work/life balance. “I wanted to do something for myself,” she says.

Although she’d never considered cleaning as a career, Shamreen, who has a bachelor’s degree in computing, says she is loving the work. “I take a lot of pride in my work and I love cleaning.”

She enjoys the new found freedom of being a business owner. “It’s never satisfying working for someone else. Now I have a real feeling of being proud of what I do.”