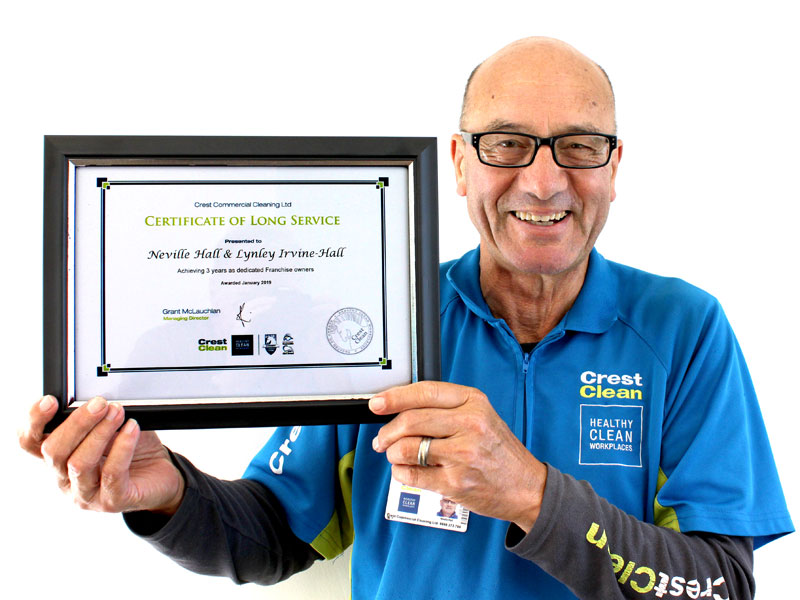 Neville Hall has chalked up three years with CrestClean in Tauranga.

He has a sharp eye for detail and says he gets a real buzz out of cleaning.

After three years of owning his CrestClean business, Neville Hall is as enthusiastic as the day he started. “I suppose I am passionate about cleanliness and cleaning. I just love to see things looking immaculate,” he says.

“I like seeing something transformed from messy and dirty to tidy and appealing to the eye.”

For Neville, joining CrestClean was big change and followed a career mostly spent at sea. He spent 30 years as a catering officer working for Interislander ferries between Wellington and Picton.

But he’s also had a spell in the tourism industry, running a motel in Napier. Buying a CrestClean business has given him a new career with more flexibility in the hours he works, he says.

Now is his 60s, he still enjoys the job and says a big bonus is that cleaning keeps him fit and active. He says he has no plans to give up work anytime soon.

“I’m a one man band and I’ll just keep doing what I’m doing and maintaining high standards for my customers.”

Jan Lichtwark, CrestClean’s Tauranga Regional Manager, says Neville is highly regarded for the quality of his work. “He goes the extra mile for his customers and does a fantastic job. He sets the bar high and takes a real pride everything he does.”