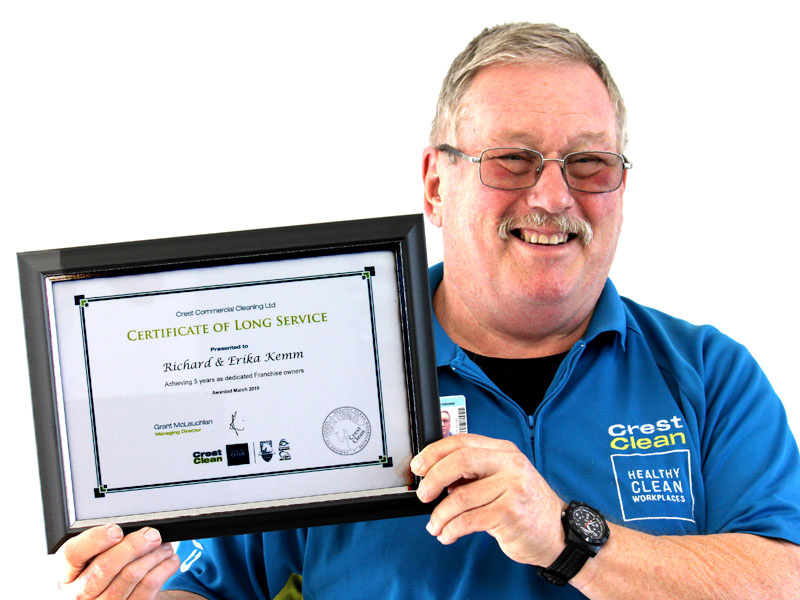 Since joining CrestClean five years ago Richard Kemm hasn’t looked back and says it was a great move.

Richard, a former business banking manager for ANZ, left his job in Hamilton and relocated to Tauranga with his wife Erika for a new start in the Bay of Plenty.

His bank job had become stressful and he had a plan to eventually work for himself. When he considered what type of business to go into, Crest soon became the front runner, he said.

In his banking job he dealt with a number of customers who were in going through the process of becoming CrestClean franchisees. And the more he learnt about CrestClean, the more he could see himself doing the same. “It was the obvious choice for me,” he says.

Although cleaning was a big change from the corporate world, the benefits of being his own boss have been enormous, Richard says. “I don’t have stress and worries and I sleep very well at night.”

He’s happy with the way it’s all worked out, he says, and working for himself has brought a new freedom. “It achieves the purpose, it pays the bills and I’m more comfortable. It gives you a lot of independence.”

Jan Lichtwark, CrestClean’s Tauranga Regional Manager, says Richard is a diligent operator and he receives great feedback from his customers. “Richard does an outstanding job to ensure his customers are happy with his work.”