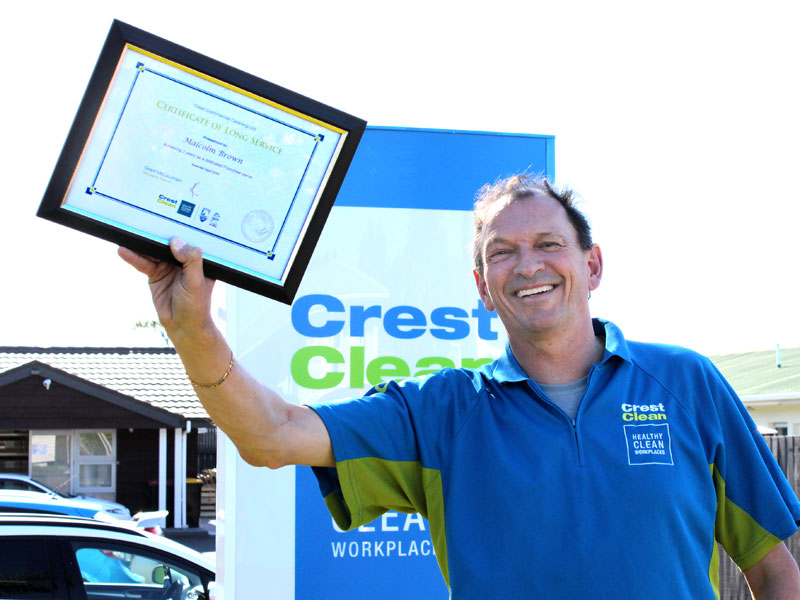 Variety is the name of the game for CrestClean’s Malcolm Brown who has two very different roles within the organisation.

As well as running his own successful cleaning franchise, Malcolm has another job ensuring his fellow business owners around the country have all the tools and materials needed to carry out their work.

After finishing his early morning cleaning round in Tauranga, his next stop is CrestClean’s Central Distribution Centre at Mount Maunganui.

As the company’s distribution despatcher he’s responsible for collating and sending out orders and also the test and tagging of electrical equipment.

“It’s the best job I’ve ever had, I absolutely love it,” says the 58-year-old. “I like being part of the team and the job has plenty of variety.”

Malcolm had a number of jobs before buying a cleaning franchise. A former salesman, he worked for Home Direct for 17 years. Although at the top of his game as a territory manager, he knew his heart wasn’t in the job any more.

“I was fed up of making the boss rich, it was time to do something for myself,” he says.

After joining CrestClean in 2016, Malcolm made a big impression in his first 12 months with his “can do” attitude and a strong drive to succeed. He jointly shared the title of Tauranga’s New Franchisee of the Year.

Regional Manager Jan Lichtwark in praising Malcom, and fellow franchisee Alex Lopaz, said: “They really looked out for their customers and both work really hard and are always cheerful.

“During training they devoted their time to making sure they learned everything they could. After completing the training they went out and helped on other jobs to learn more.

“They have a great attitude and have invested their own time and are always willing to help out.”

Malcolm prides himself on looking after his Tauranga customers and particularly enjoys the relationship he has with managers at Cobb & Co.

Tasked with cleaning the eatery each day, he relishes the challenge of doing a good job. “I don’t care how messy it is, I know that in two hours I can turn it around and they’ll be ready for business.’

A number of his cleaning contracts he looks after have been obtained through word of mouth. “With the cleaning it’s all about your reputation and doing a good job for customers. Over the past three years a lot of work has come my way and I really enjoy what I’m doing.”