Jason ticks off long-term goal with appointment as training assessor 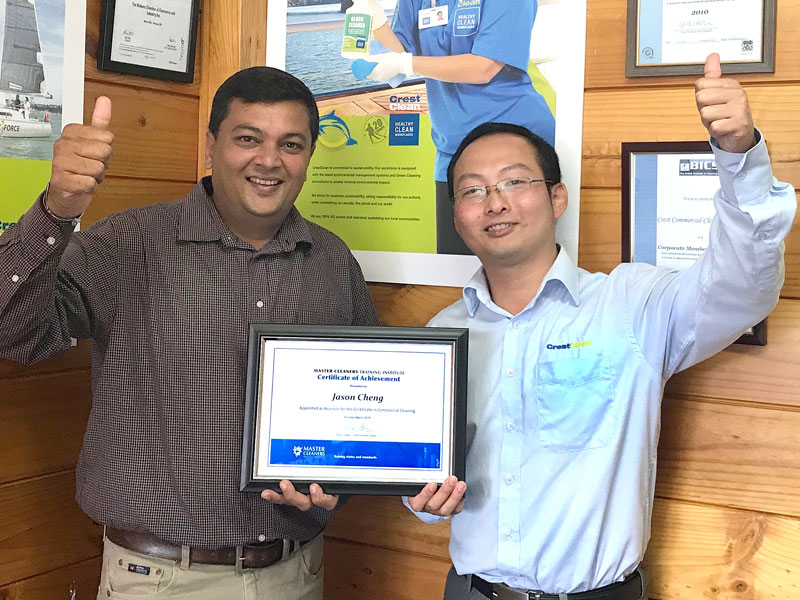 One of CrestClean’s most experienced staff members has added another string to his bow.

Jason Cheng, who is a quality assurance co-ordinator for the Waikato, is now a qualified Assessor for Master Cleaners Training Institute.

Becoming an assessor has been on his radar for some time, he says. “I’ve been planning to go for it since I became a quality assurance co-ordinator.”

As well as delivering training modules, which lead to the Certificate in Commercial Cleaning, Jason is now qualified to sign-off franchisees’ competency on completing their final assessment.

“It’s an important job and ensures our people have reached the highest standards. It also means CrestClean customers can be assured they’ll receive the best service,” he says.

“He’s been at the coalface of cleaning for some time and he’s very aware what’s required from a customer point of view. He has very high standards and a thorough understanding of the cleaning industry and is an asset to our organisation.”

Jason began with CrestClean as an employee for a Christchurch franchisee. He is originally from the Guangzhou region in Southern China.

He came to New Zealand in 2007 to attend Lincoln University in Canterbury, where he studied applied science. After graduating, he took a position as a quality assurance manager for a large dairy factory.

Wearing his quality assurance co-ordinator hat, Jason undertakes quality audits for CrestClean, assists with implementing new contracts and helps guide franchisees new to the business. CrestClean has similar co-ordinators in its other regions around the country.