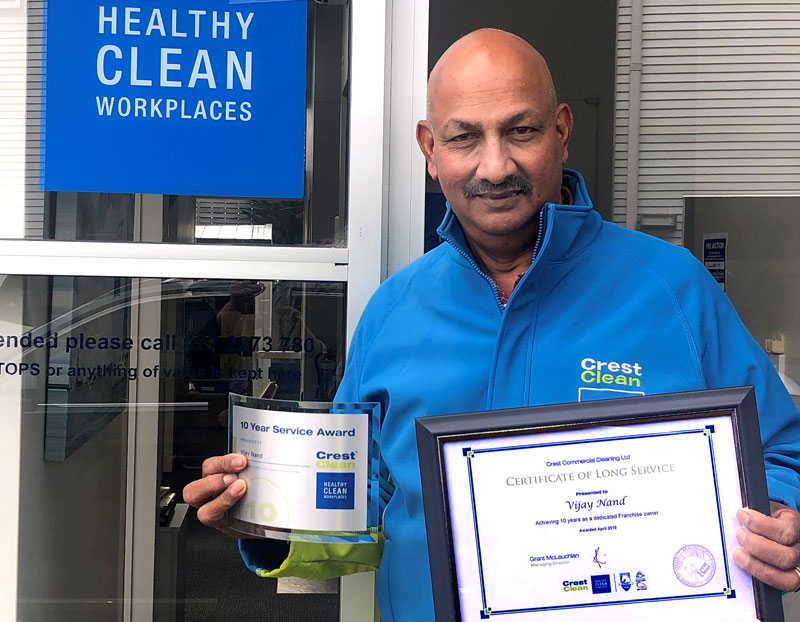 Vijay Nand is proud to receive his long service award.

Vijay Nand is originally from Fiji where he was a superintendent of police. Before arriving in New Zealand in 2003 he spent two years with the United Nations working as regional commander in Bosnia.

He decided to move to Auckland to join his siblings who were already living here. Vijay first found employment at Armourguard but later changed tack to work in the insurance industry. After a spell in real estate, he made the move to join CrestClean in 2009.

Vijay says buying a franchise has been rewarding. “CrestClean doesn’t just give you employment it builds a future for you.

“For people who have very little to start with, they can change their luck and become financially secure over time and build a very strong future with the ability to own their own home.”

Vijay says he enjoys being his own boss and the work is free from hassles. “If you do your part there are no problems.”

He says Crest is very supportive in providing professional training and advice.

Linda Hill, CrestClean’s Auckland East Regional Manager, says Vijay has very high standards and has received 35 Certificate of Excellence awards since being with the company.

“He enjoys the great, long-standing relationships that he has built with his customers over the past 10 years.”

Vijay initially purchased a $40,000 CrestClean business but quickly increased the turnover to $100,000. “He is proactive and has brought six of the cleaning contracts himself and that has boosted his business,” says Linda.

“I met Vijay a year ago and immediately liked his cheekiness and friendliness. He’s highly regarded by his customers for the quality of his work.

“Vijay is also very helpful when new cleaning teams join CrestClean. He gives them advice and support and is a great asset to the company.”