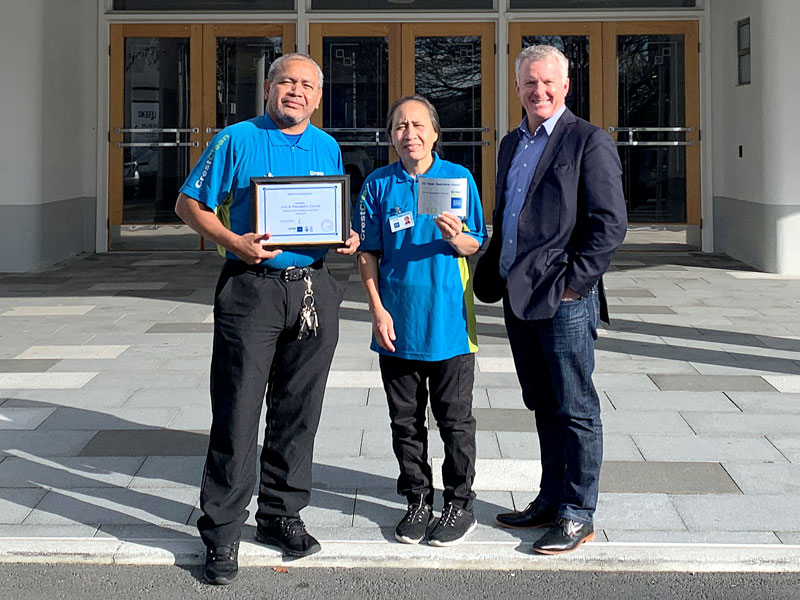 A former environmental scientist who developed the blueprint for a Pacific island nation’s climate change strategy is celebrating 10 successful years with CrestClean.

Before moving to New Zealand to start his own cleaning company, Poni Faavae worked as an adviser for the Tuvalu Government. He was instrumental in setting out the country’s long-term plans to address the problem of rising sea levels, which is feared could eventually swamp the world’s fourth smallest nation.

In his high-profile role, Poni attended climate change conferences and meetings around the globe, travelling to Italy, Japan, Cuba and the United Arab Emirates.

He began his career at Tuvalu’s meteorological office and studied overseas to gain an environmental science degree.

“When I returned to Tuvalu I began working at the climate change branch. I drafted the national adaptation plan of action. That’s Tuvalu’s strategy of adapting to climate change,” he says. Already, two of Tuvalu’s nine islands are on the verge of being submerged, swallowed by sea-rise and coastal erosion.

Although he enjoyed his job as Project Coordinator for Climate Change, Poni and his wife Tau decided to move to New Zealand so their three young children would get a better education.

They settled in Wellington but Poni’s plans to join CrestClean were put on hold as the company had yet to establish a presence in the capital city.

“CrestClean offered me work in Tauranga but we didn’t want to move,” says Poni. When they eventually joined the company in 2009 the couple were one of the first franchisees in Wellington.

Beginning with a small cleaning business, Poni and Tau have increased their turnover and today they now run a large CrestClean franchise and employee four staff members.

“One of the good things about running a business it that it has given us the opportunity to provide for our kids’ education and our new life in New Zealand,” says Poni. “If I’d stayed back in Talvulu I don’t know if my kids would have had the same opportunities.”

Poni enjoys the work and says cleaning can be challenging but also rewarding. “What I enjoy about the cleaning is the challenge we face of how to satisfy the demand of the customer.

“I always encourage my workers to do the cleaning to the best of their ability and whatever routines we have we must follow so we can keep the standard high. My employees are hardworking and they know what’s needed.”

“They have exceptional quality and have always consistently provided a very high service within their 10 years in CrestClean.

“Poni is full of experience and knowledge and is very highly respected within the greater Wellington region.

“He has been pivotal to the success of the region and is always willing to help and go the extra mile. Their team is made up of family members who are all just as committed and hard working as Poni and Tau.

“For me, his reliability and knowledge as well as his customer-service driven attitude is invaluable. He always leaves me in awe after speaking to him and I look forward to another 10 years with him and his team.”