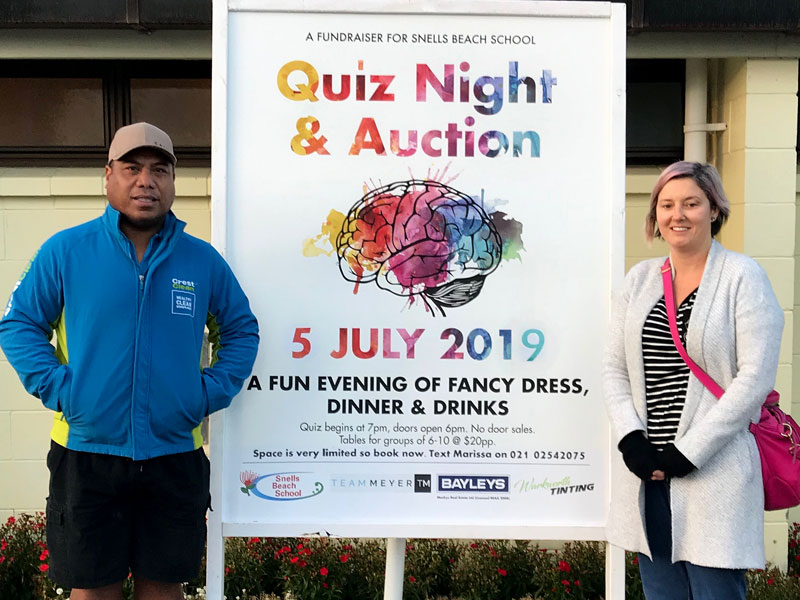 Organisers of a school fundraiser had one less job to worry about thanks to CrestClean business owner Bura Takinoa.

Bura volunteered to clean up following the successful quiz night and auction held at the Community Hall in Snells Beach, which raised $18,000 for Snells Beach School.

Marissa Bale, one of the event’s organisers, says at the end of the evening the hall was looking a bit worse for wear and having someone take care of everything was an absolute godsend.

“It was in a bit of a mess after 250 people had been eating and drinking and having a great time.”

Following the Friday night fundraiser, Bura turned up early the next day to work his magic on the floors and toilets. “We really, really appreciate that Bura comes in and does all this for us,” says Marissa. “He’s now helped us two years in a row and we are so grateful.

“It just means that a small group of people who are running the event and working-off their feet don’t have to stick around until 1 or 2 in the morning mopping and cleaning everything.

“We are already exhausted and Bura’s contribution means it’s just one less thing for us to worry about.”

Bura, who cleans Snells Beach School in the week, says he didn’t have to think twice about being involved.

“I like to help out where I can as it’s a fundraiser and the event raises money for the school. I enjoy working at the school and everyone there is really nice.”

Neil Kumar, CrestClean’s North Harbour Regional Manager, says Bura often goes beyond what is expected for his customers. “It’s so kind of Bora to give up his time to help. It’s a really awesome thing to do.

“He did a great job after the event cleaning the toilets, the floors and vacuuming, it’s a lot of work.”