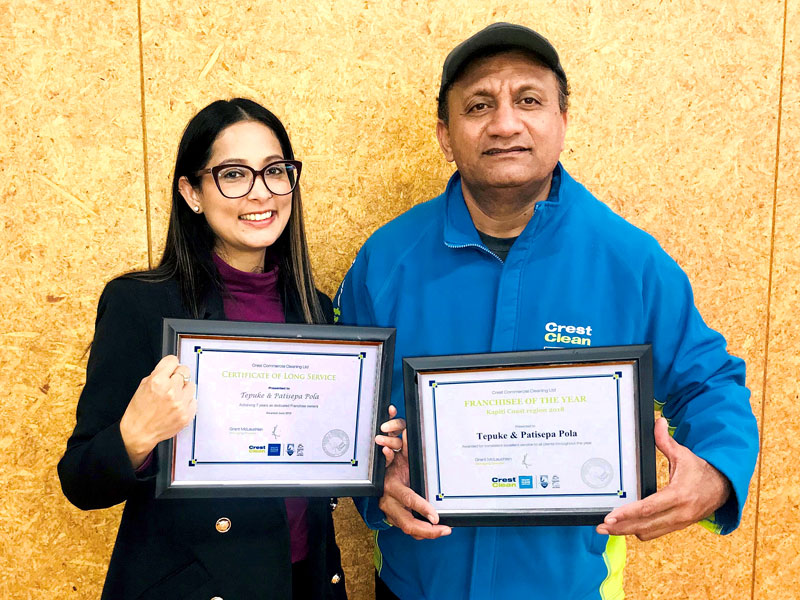 They’ve landed a prestigious award following great feedback from customers delighted by the quality of their team’s cleaning.

Shareen Raj, CrestClean’s Palmerston North/Kapiti Coast Regional Manager, says Tepuke and Patisepa Pola have had an outstanding year and she was delighted to award them the title of Kapiti Coast Franchisee of the Year.

“I’ve had a lot of compliments from his customers that Tepuke does a fantastic job for them. He’s excellent with communications and is quick to respond to the customer.”
But it’s not just customers who have been impressed, says Shareen. “Tepuke has four employees and he manages his team very well. He works alongside them and is very encouraging.

“His team members are happy and have been with him for quite some time.”

The couple have owned a CrestClean franchise for seven years. Before being business owners Tepuke and Patisepa worked part-time as commercial cleaners in Auckland.

Buying their own franchise has helped them get a foothold on the housing ladder, says Tepuke. “CrestClean helped us buy the first home with the additional income. We’ve done really well and now we’re looking for a bigger home.”

He’s says he’s very appreciative of how CrestClean made it easy to become a business owner. “I’ve learned a lot and the training was really good. I’m very happy with the support I get, particularly from my regional manager.

“I’ve learned a lot from the training. CrestClean is the best job I’ve had and I’m very happy.”

Tepuke, who also works as bosun’s mate on a Wellington to Picton ferry, has plans to become fulltime with CrestClean as his business grows.