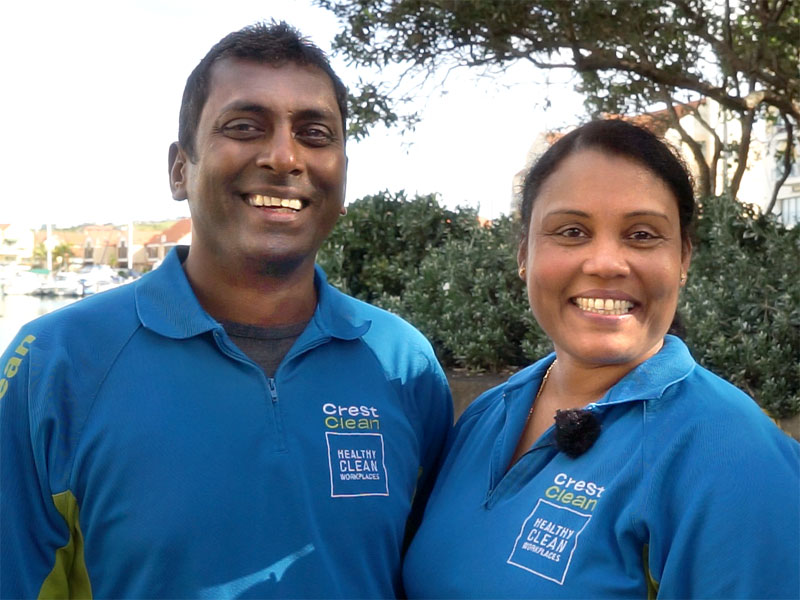 Naresh Mani with his wife Radhna.

When it comes to industry knowledge, CrestClean’s new Taranaki Regional Manager has bucket-loads of experience and enthusiasm.

Naresh Mani, who has just relocated to New Plymouth from Auckland, has a strong belief in helping others. He enjoys sharing what he’s learnt with business owners starting their career in commercial cleaning.

Naresh joined CrestClean in 2014 and had been based in the company’s North Harbour Region. He’s looking forward to helping his new Taranaki team members grow their businesses.

“Having been a franchisee myself I know the job from the inside out and I can pass on the things I’ve learnt through five years being a franchisee,” he says.

“Our CrestClean system is a solid system that is easy to follow with a well proven training programme that leads to success.”

Meeting new and existing customers is a major focus for Naresh and he’s been flat out since arriving in New Plymouth. “We have a great team in the Taranaki Region and we can provide a tailored solution for all their cleaning needs, whatever the size of their business.

“The CrestClean brand has gained a strong reputation as being the best in the cleaning industry and we can assure the customers they can rely and trust us to do a professional job to a very high standard.”

Originally from Fiji, Naresh has a background as a professional sign-writer and joined CrestClean after deciding he wanted to try something different.

“I eventually became a bit fed up with sign-writing and thought I should change direction and do something else,” he says.  “I’m the sort of person who is not afraid of hard work and I was happy to retrain,” he says.

But after a year in business, Naresh found his CrestClean franchise had become so successful it was too much for one person to handle. “At the time my wife was working in the birthing suite at North Shore Hospital.

“She had a stable job but I was in a stage where I had grown my business on my own and it was getting hard to cope. I asked my wife if she would leave her job and join me so we could work together.”

After joining forces, Naresh and Radhna gained more customers as their business expanded even more, eventually hitting a six-figure turnover. The extra income meant they were able to upgrade their home and build a brand new house in Gulf Harbour.

The opportunity to step up to a regional manager’s role occurred at a good time in the couple’s life, days Naresh.

“We always thought of moving out of Auckland because of the busy life in the city and we wanted to live and work in a place where the pace of life is slower. In Auckland you can get stuck in traffic for hours.

“It was good timing as our kids are grown up and have left home and we are pretty much free.”

Having visited Taranaki previously, they instantly knew it would be good move, he says.

“Taranaki is very similar to gulf harbour. We love being near the beach and we love the area. I like the mountains and Mount Taranaki is really impressive.”

“He was an exceptional franchisee in North Harbour for five years. He has a real personable nature and he fosters great long-standing customer relationships.

“The Taranaki region is ripe for growth for CrestClean. We have a well-established base with great operators and we plan to build on that success.”