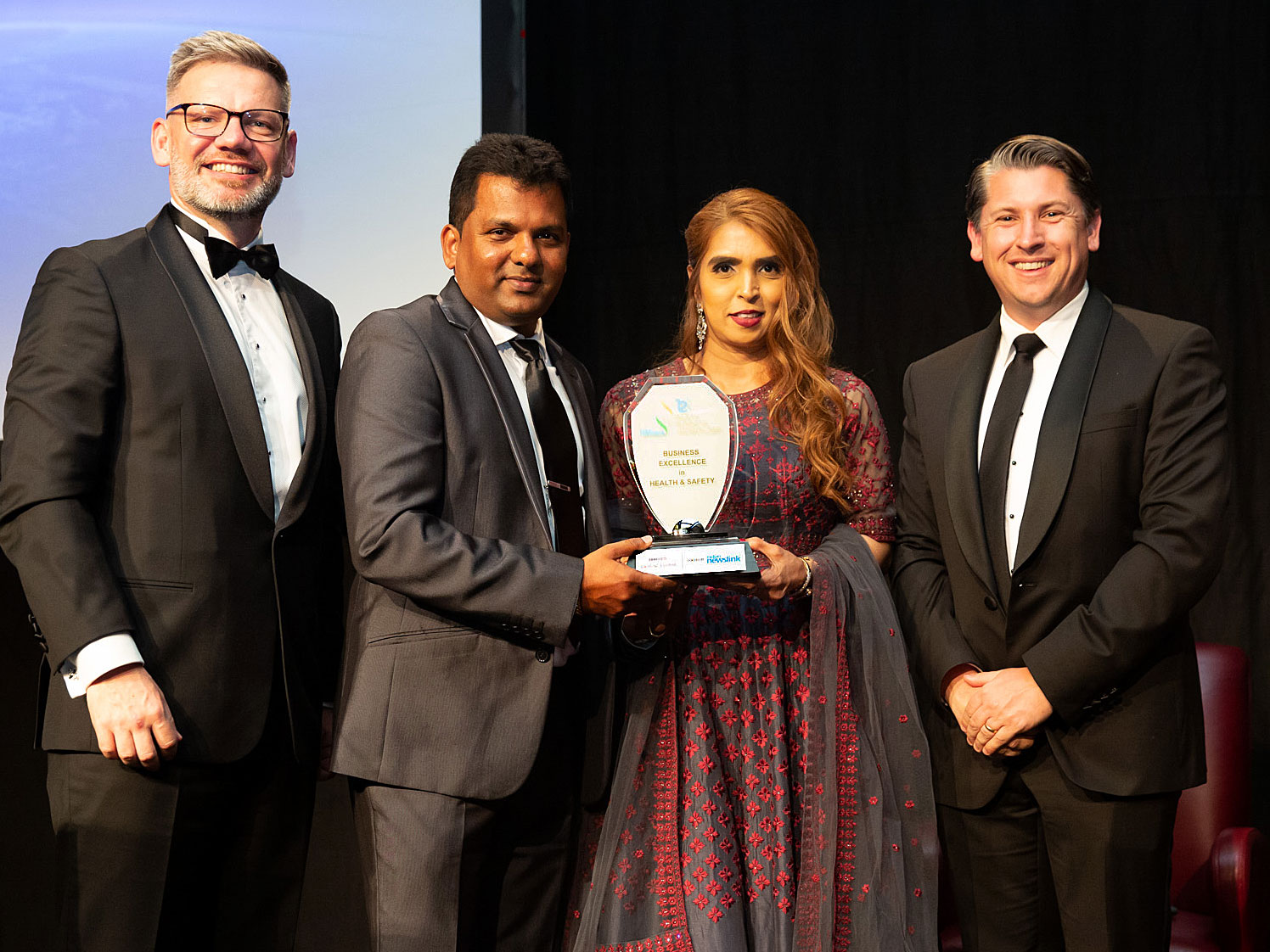 CrestClean’s Viky and Nileshna Narayan have scooped another prestigious business award just two weeks after picking up the title of Regional Master Franchisee of the Year.

The couple, who look after the company’s Auckland South Region, won the Business Excellence in Health and Safety category at the annual Indian Newslink Indian Business Awards.

Their win on Monday evening, at a gala dinner at SkyCity Convention Centre in Auckland, follows their recent success at the Westpac New Zealand Franchise Awards.

Viky says the award is an endorsement of CrestClean’s commitment to maintaining safe and healthy workplaces through SafeClean – the company’s acclaimed health, safety and environmental management system.

The presentation of the Business Excellence award to Viky and Nileshna was made by Iain Lees-Galloway, Minister for Workplace Relations & Safety and Immigration.

Award judges praised Viky and Nileshna for their commitment to health and safety.

“Their approach to health and safety is impressive, with strong training, governance and audit processes in place to reduce risks in the workplace.

“An outstanding organisation that has excelled in certain industry sectors by meeting the needs of customers and delivering this strong health and safety offering.”

Also present was Fiji’s Deputy Prime Minister and Attorney General Aiyaz Sayed-Khaiyum, who was a guest of  honour and was one of the first to congratulate Viky and Nileshna.

“He said ‘great work and congratulations on winning the award. Keep up the good work’,” says Viky. “It was a great honour to meet him.”

Originally from Fiji, Viky and his wife, Nileshna, purchased a CrestClean franchise in 2005 and quickly moved up to the role of Regional Manager, overseeing the large South Auckland customer base.

“We believe that in this day and age, no business can truly succeed without ensuring a safe workplace environment.

“SafeClean gives our regional managers the tools, resources and support to ensure their businesses, their franchisees, their customers and the general public are not adversely affected by our cleaning operations.”

Grant says Viky and Nileshna Narayan have worked tirelessly for their customers and franchised owner-operators.

“They have embraced this system and truly deserve this award. We are proud of them for promoting and providing an award-winning health and safety culture for their Auckland South customers and franchisees. Their business operations provide a model for all to emulate.

“This great honour represents a shared effort on the part of CrestClean and the Indian business community to create and contribute to a healthier, safer – and cleaner – New Zealand.”

Winning two major business awards within a fortnight was still sinking in for Viky and Nileshna.

“We have long been advocating the wellbeing of our people to ensure they go back home safely after work,” he says.

“Personally it was amazing to be recognised for the work we’ve done. To get two awards is amazing and it feels like I’m living on Cloud Nine.”