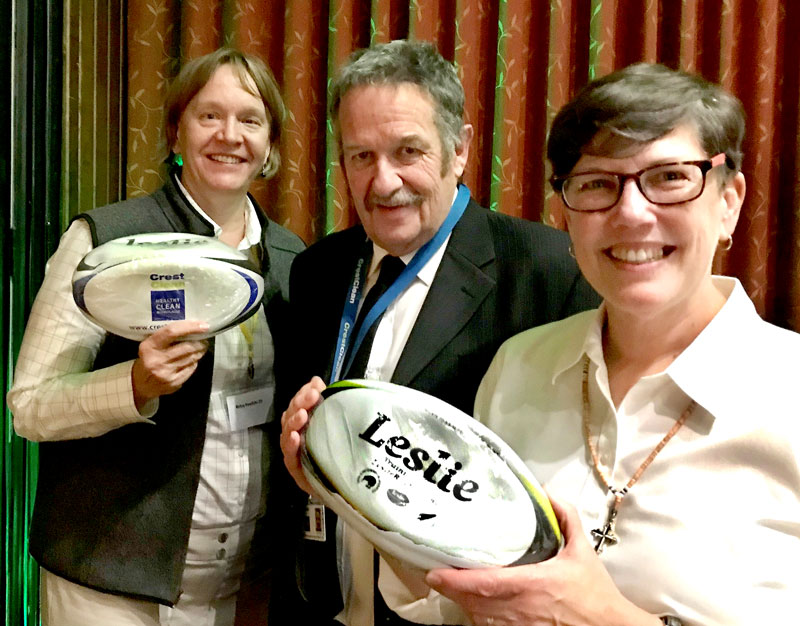 Glenn, who was manning CrestClean’s stand at the Dominican Education Conference, was approached by the event’s keynote speaker, Sister Laurie Brink, and her colleague Sister Betsy Pawlicki.

But it was rugby not cleaning that quickly became the hot topic of conversation for the two women. They were fascinated by a conference draw Glenn was running to win CrestClean-branded rugby balls.

The pair, who had earlier flown in from Chicago, were among the first people to arrive at the Invercargill conference, says Glenn.

“With no Jet lag in sight from their long journey to New Zealand, they were in fact the first to visit the CrestClean stand that I had just set up for the event.

“There was quite some discussion over rugby – and they both indicated that there was no rugby played in Chicago and how great it would be if they were to win the rugby balls to take back with them.”

Keen to win a Kiwi souvenir, the visitors entered the draw – but it didn’t go their way.

“During the course of the conference dinner, the draw was made for the winner of the rugby balls, but alas neither of the two Chicago representatives were drawn as the winner,” says Glenn.

Reflecting on his earlier conversation with the Americans, Glenn had a surprise in store for them. He duly produced an extra two rugby balls and asked Laurie and Betsy to step forward.

He commented that they had impressed him with their discussion and the fact that obviously the people of Chicago were somewhat deprived by not having rugby on the menu for the children. A rugby ball was duly presented to each of them.

“I sent them on a mission to introduce rugby to the children – and perhaps in the future maybe even the All Blacks could visit to give them some tips,” he says.

“Who knows, maybe the Americans could then also beat the Australians at Rugby, just like New Zealand does!” he said with a grin.

Since returning home, the women have kept Glenn updated posing with the rugby balls against the Chicago skyline. 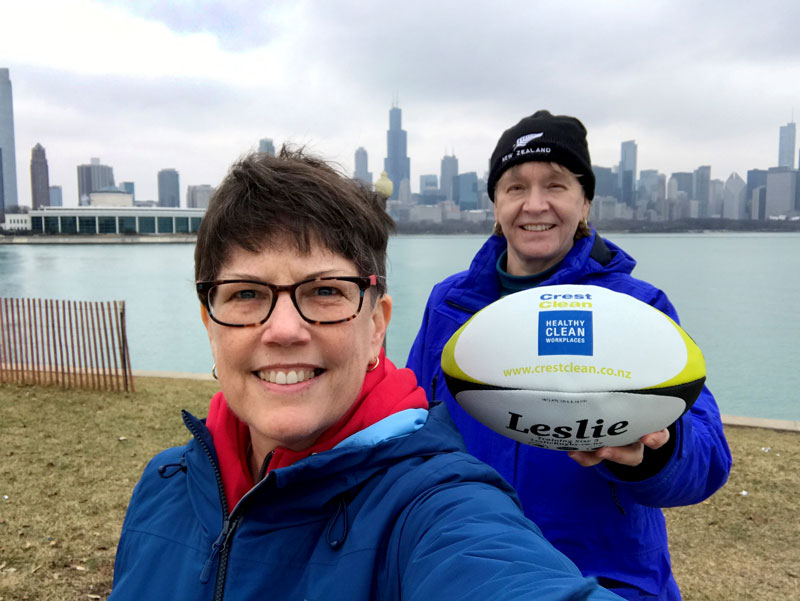 Sister Laurie Brink, Professor of New Testament Studies at the Catholic Theological Union in Chicago, and Sister Betsy Pawlicki, who is on the leadership council for the Dominican Sisters of Sinsinawa. The pair are seen back in Chicago with the rugby balls from CrestClean.